Last month, Tom Chai Sosnik, a 13-year-old living in California, came out as transgender at his Jewish school, Tehiyah Day School. In the video of his coming out, he said, “I am no longer Mia. I never really was. And now I finally stand before you in my true and authentic gender identity, as Tom.” 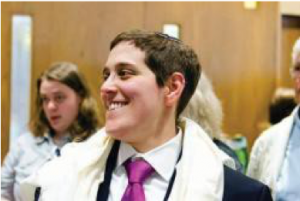 In the next few days, the video went viral online and caught the attention of Becky Silverstein, a young rabbi. Silverstein, originally from Great Neck, Long Island, is currently the Education Director at the Pasadena Jewish Temple and Center in California, a Conservative synagogue. He spent eight years in Boston, when attending The Rabbinical School at Hebrew College and working in the Jewish community.

Silverstein, who identifies as “gender queer” (outside of traditional gender roles) and “trans,” was inspired by Tom’s courage, and wrote an open letter to trans teens everywhere in The Advocate, an LGBT-interest magazine (for lesbian/gay/bisexual/ transgender). “In your face, I also see a vision of what I want so badly for our Jewish community to be: a place where everyone can be celebrated for the entirety of who they are,” Silverstein wrote to Tom and teens like him. Writing at the time of Passover, he compared the risk of coming out as trans to the leap of faith Israelites took during their exodus from Egypt.

After publishing his open letter, Silverstein spoke with The Jewish Advocate about gender identity and what it means to be LGBT in the Jewish community. To start with, Silverstein explained that transgender is an umbrella term for individuals identifying with a gender that is different from the one they were assigned at birth. He also explained his reason behind keeping the name Becky after coming out as trans.

“It’s my name, I grew up with it, I love it,” Silverstein said. “Part of what I like about it is the dissonance between Becky and me and playing with what it means to be gender queer and being gender fluid, and giving pause to people about my name.”

Growing up, Silverstein said he was always a gender non-conforming kid. In middle school, thoughts of being gay began to cross his mind. Fifteen years ago, while a freshman at Smith College, he came out as lesbian. It was not until he entered rabbinical school, where a close friend and colleague was also trans, that Silverstein began to explore his gender identity more openly.

Silverstein considers himself lucky. While at Smith and Hebrew College, he found support within his community. But there was another piece of good fortune that may have set him on the path he is on today. Silverstein’s rabbi when he was growing up, Karen Bender, was one of the first out lesbian rabbis in the Reform movement. “The only person I knew who was LGBTQ-identified at all, was my rabbi,” Silverstein said.

Whether coming out in his Jewish community at Smith or at rabbinical school, Silverstein said, “These journeys of understanding myself as a Jew and as a rabbi and as a lesbian, and now as a trans guy, have always overlapped.”

Despite the prohibition of homosexuality in religious texts, as Silverstein explored his gender identity, he continued to find comfort in Judaism. “My queer identity was not a source of alienation as it is for so many people,” he said. “Those verses [forbidding homosexuality and cross-dressing] are not the sum total of Judaism, nor are they the sum total of folks’ experience in the Jewish community. There are places in the Jewish community where rabbis read those verses and speak out against homosexuality and being transgender and make them the center of community discussion and use them as tools of alienation, but I don’t think we need to use them that way. There are so many other beautiful things in the Jewish tradition.”

Jewish communities have made much progress in welcoming LGBT individuals, but there is still a lot of work to be done, noted the rabbi. “Even communities that are warm and welcoming often don’t know why they need to say it out loud,” Silverstein said. “Our religious leaders really need to say, ‘This is the place for you.’” Another important step is education on gender and sexuality, especially teaching that gender identity and one’s physical body do not always overlap.

Silverstein is on the board of directors at Keshet, a Boston-based national organization that works on inclusion of LGBT individuals in Jewish life. Through Keshet, many Jewish communities around the country are making these changes in inclusivity and education. According to Joanna Ware, Boston regional director at Keshet, inclusivity of trans individuals in Jewish communities is trailing behind that of gays and lesbians. That is one of the reasons her organization starts education at an early age, at Jewish camps, day schools, and youth groups. Children often understand issues of gender identity better than adults, she noted. About Silverstein, Ware said his new role is well deserved. “He is one of the most talented Jewish educators I know.” Silverstein said there were some experiences in his job search that his classmates at Hebrew College did not have, including awkward moments explaining his preferred pronouns during interviews and careful reading of non-discrimination statements, but much of his struggle came from an internalized narrative of feeling less than a straight, white man, and feeling that he needs to work harder because of it, Silverstein said.

Now that he is settling in to his new job, he think that being a trans rabbi is a dual responsibility. “I think about a member of my congregation who has a trans son or a lesbian couple, folks who do approach me because I am out. It may sound harsh, but there are lots of rabbis, and if my gender identity is going to alienate someone, I’m not the right rabbi for them. There are more rabbis for them than for the trans teen in Canada I have a correspondence with.”