Group maintains the ties between parents and their LGBT children

Whether they identify as lesbian, gay, bisexual or transgender, LGBT Jews face many challenges, and so do their parents.

Joanna Ware, lead organizer and training coordinator for Keshet, an organization promoting full inclusion of LGBT Jews in Jewish life, gave an example over the phone from Keshet’s national office in Jamaica Plain. 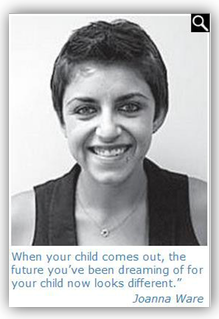 “One parent … remarked that [she spent] her whole life deeply immersed in Jewish community,” Ware said. “Her peers … were going through the exact same milestones and challenges as she was, until this moment when her son came out and she realized that all of a sudden she did not have that same network of parents.”

While there are other organizations for the family members of LGBT individuals, Ware explained that “there was a real, clear need for a program, a network and mechanisms for support, for parents … completely immersed within the Jewish community because there are some … specific challenges that come up for Jewish families”

The Keshet Parent & Family Connection is a confidential peer mentorship and support program currently in the Boston, Philadelphia, Washington, D.C.-Baltimore and Denver-Boulder areas. There are plans to expand the program to the Chicago area in the near future.

Parents or other family members seeking support are asked to fill out a confidential online form on Keshet’s website, and then are connected to a mentor whose own background and experiences are most similar to their own. Factors considered include the branch of Judaism to which the family subscribes, as well as the age and gender of the LGBT family member.

“I tend to get matched – and I’m one of the people who does the matching – [with] a parent [of ] a lesbian daughter somewhere in their 20s into their early 30s,” because that reflects her own experience, explained Jayne Guberman, one of the co-founders of the Connection. “You find that parents of lesbians and gay sons sometimes … have different experiences.”

Guberman also noted that “the people who are dealing with the most difficult [and] most pressing issues are the parents of trans[gendered] kids … sometimes [these] parents [say] that they wish their children could be ‘plain vanilla lesbian.’”

Ann Falchuk, one of the mentors, stressed the importance of acknowledging the experiences of the parents to whom she speaks. “We’ve been in their shoes; we are in their shoes,” she said.

“Issues that come up are embarrassment,” added Falchuk, who says that while LGBT people often have an extended period of self-reflection before they come out, it can be sudden and disorienting for other family members. “I came out when my daughter came out of the closet. I walked out with her, but she had been in the process for two years. I entered into the world and I didn’t know the language.”

Falchuk said parents often express both confusion and a desire to remain connected with their children: “It’s a child I thought I knew that I don’t know; I’m just learning to know him or her again, a part of their life that I’m bewildered at.”

Sabina Feczko mentors fellow parents from the Orthodox community. “I think their initial concern for an Orthodox person has to do with the statement in the Torah that discusses homosexuality [that describes it as] an abomination,” she said. “A lot of us have 12, 15 years of day school education … [but] it’s not something that’s delved into a whole lot, and you’re just left with that statement … what does that mean for your child now?”

Feczko added that “it’s only after you can calm down and put things in perspective” and “say to yourself [that] ‘I don’t think there’s anyone who does all 613 [commandments].’ …Regardless of how that statement is interpreted … it doesn’t mean to me that your child is bad or that your child can’t live an Orthodox life.”

Ware noted, “When your child comes out, the future you’ve been dreaming of for your child now looks different … in ways that are suddenly unfamiliar and scary, even if not coming from a place of homophobia.”

Guberman recounted “my daughter was … still in college, [and] we were walking to the car after dinner. [She and her then-girlfriend, now wife] were walking ahead of us and my husband and I were walking behind … holding hands … and I was watching them … with their hands rigidly at their sides, not touching, and I remember feeling this flash: They don’t feel like they can walk down the street and do something as simple as hold hands.”

In early 2009, however, Guberman got exactly what she had always dreamed for her daughter: a wedding. “My daughter-in-law is not Jewish, so that was some complication,” she said. “She came from a Catholic family, some of which was homophobic at thetime.”

Guberman explained that her daughter and daughter-in-law “worked really hard to create a largely Jewish ceremony [that] was respectful to both traditions. My daughter … was steeped in Jewish life and it was important to her … they found a Rabbi who would work with them. Judaism is important in their lives together.

“They certainly had a beautiful ketubah. It was what I wanted; she got married like anyone else, except she wore red.”

The Keshet Parent & Family Connection is confidential and can be contacted through Keshet’s website, www.keshetonline.org.