When Jewish comedian Gilda Radner lit a menorah on Saturday Night Live in the 1970s, it was the very first time that lighting Chanukah candles had been broadcast on national television. The skit was a hilarious riff on the ubiquity of Christmas, but what millions of viewers remember most is Gilda. After reciting the blessings over the Chanukah candles, she beamed.

Then, unexpectedly, she began to cry— and it wasn’t part of the script.

The power of this moment was in seeing a television star—someone so adored by the American public and so integrated into American culture—openly proclaim her difference when she could have so easily chosen not to. 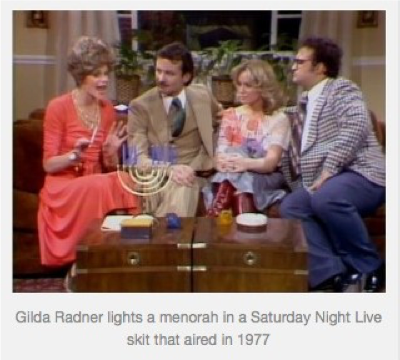 Publicizing difference is fundamental to Chanukah, the most widely observed Jewish holiday in the United States. Jews are commanded to light the menorah in a place in our homes that is easily visible from the street: “One should place the Chanukah lights by the entrance to one’s home, on the outside” (Babylonian Talmud, Shabbat 21b). The 16th-century code of Jewish law, the Shulchan Aruch, is very specific about the maximum and minimum height for the menorah’s placement, where in the room the menorah can be placed, and the time of day at which lighting should occur. This specificity is all for the sake of maximizing the visibility of the menorah to the outside world. As the Mishnah Berurah, a 20th-century commentary on the Shulchan Aruch, notes, “This is required because of the need to publicize the miracle” (Mishnah Berurah, 671:21). Publicizing the miracle is so critical for the rabbis that they are willing to say that in certain situations, kindling the Chanukah lights even takes precedence over reciting Kiddush over wine on Shabbat (Babylonian Talmud, Shabbat 23b).

But what exactly are we publicizing? The miracles of Chanukah itself (the Maccabees’ improbable military victory over the Syrian-Greeks and the small jug of oil that lasted eight days) aren’t obvious to those who witness the flickering light of candles in a window. So whom is this display really for and why does it matter so much that the sages required it?

I believe that the candles convey our choice to be visibly Jewish in a world where it is all too easy to hide. I see the purpose and power of this act as two-fold: affirming and enriching those who choose to claim Jewish identity in the public eye, while challenging onlookers to celebrate difference, not dismantle it.

Much like this choice we face on Chanukah, I’ve always felt that choosing to come out as lesbian, gay, bisexual or transgender is a profoundly Jewish act—making a public claim to identity; asserting an affiliation; daring to declare difference.

In October 1993, I was a college student milling around the campus green on National Coming Out Day. A few minutes later, I stepped away from the crowd and joined the few students anxiously standing in line behind a microphone. We each would share a few words about coming out as lesbian, gay or bisexual. I have no recollection of what I said. For me, the moment that I recall vividly—the moment that mattered and required courage—was when I stepped into that line. I didn’t need to say a word. The moment I joined the others in that line was the moment I emerged from the invisibility and silence of not being out into the public sphere of expressing who I am. It was exhilarating.

And yet, we know that in some parts of the world, making our identities known and visible comes with acute risk. Last year, David Kato, a Ugandan LGBTI activist and one of the most visible and vocal defenders of human rights for lesbian, gay, bisexual, transgender and intersex Ugandans, was brutally murdered. Kato partnered closely with AJWS’s Ugandan grantees to voice opposition to the Anti-Homosexuality Bill—a piece of proposed legislation to strengthen existing penalties against homosexuality and make same-sex relations in Uganda punishable by prison.

Those of us who live in relative physical, spiritual and emotional safety bear the responsibility of making visible that which is too risky for others to expose. Whether it’s putting our menorahs in the window or waving a rainbow flag, working for justice—on the local, national and global stage—demands revealing what oppression often conceals.

The lesson of Chanukah isn’t only about the miracle of light, victory over oppression and the power of rededication. It’s  also about demanding to be seen. Coming out, showing up and making the choice to put our identities in the public sphere— much like the choice Gilda Radner made—can be a prerequisite for repairing the soul and, as importantly, a moral telescope for recalibrating the world.