For many transgender people—those who identify with a gender that is different from the one they were assigned at birth—going into a public restroom is a daily ordeal.

While Massachusetts lawmakers debate a bill on transgender public accommodations, many Jewish organizations are ahead of the curve on fighting discrimination of trans individuals. 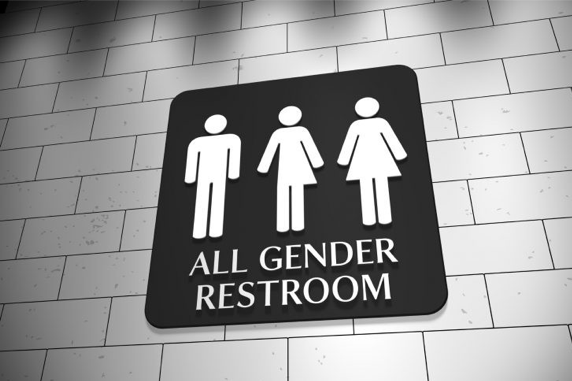 Gann Academy in Waltham, Solomon Schechter Day School of Greater Bostonand the Jewish Community Centers of Greater Boston, both in Newton, are some of the institutions that already have gender-neutral restrooms.

At Gann, students worked together with the school administration to make this happen earlier this year. “When the issue arose, is there going to be a bathroom that transgender people feel comfortable using, we made sure that there was a bathroom,” said Head of School Rabbi Marc Baker. “For us, it seemed like a reasonable and obvious thing to do.”

The JCC’s current building has gender-neutral facilities, and as it gets updated and expanded during the “Our Campaign to Re-imagine the JCC” campaign, JCC leadership has placed an emphasis on incorporating gender-neutral restrooms in the building plans. “We’ve been working on this issue for a long time, given our mission to be welcoming to everyone in the community,” said Rabbi Mark Sokoll, president and CEO of the JCC. “Many years ago, we made it possible for families to have membership at the JCC depending on however they defined themselves as a family.”

Earlier this month, the Massachusetts state Senate passed a bill that bans discrimination against transgender people in public accommodations like restaurants, malls and other locations, and allows them to use public bathrooms and locker rooms that correspond to their gender identity. The legislation had the support of Senate President Stanley Rosenberg, a Democrat from Amherst. This week, a version of the bill will be debated in the House of Representatives, where it is also expected to pass.

“This legislation is about ensuring transgender people have dignity and respect and have accessto basic needs and resources like the rest of us,” said Joanna Ware, Boston regional director of Keshet, an LGBTQ advocacy group headquartered in Jamaica Plain, which educates oninclusivity in the Jewish community.

In 2011, Massachusetts lawmakers passed another piece of legislation that banned discrimination based on gender identity in employment, housing, credit and public education, but excluded public accommodations. If the current bill becomes law, protection against discrimination of trans individuals will be more complete.

“Under the current law, you cannot be prohibited from getting a job because you’re transgender, but at the end of your shift, if you went to sit down in a restaurant, you could be asked to leave because either management or the patrons felt uncomfortable,” Rosenberg explained. “That is un-American and we do not allow that kind of discrimination for anyone.”

The Jewish Community Relations Council of Greater Boston has been working on this issue for over five years, since the first piece of legislation. While Keshet goes into the Jewish community to start conversations and educate about LGBTQ issues, the JCRC looks outward by working with lawmakers on Beacon Hill.

When asked why his organization has taken on transgender discrimination, Executive Director Jeremy Burton said, “We’ve always put civil rights front and center, including other LGBT issues like marriage equality.”

Rosenberg noted that protection of transgender individuals aligns with Jewish values of standing up for injustice. “If the Jewish community doesn’t understand the pain and unreasonableness of discrimination, then no one would understand it, and so I think it’s very consistent with our values to repair the world and to work to eliminate discrimination in all of its forms,” he said.

Burton said that he has not encountered much opposition to transgender legislation in the Jewish community, but has met some people for whom it is “not the highest priority.”

Keshet works with those organizations that approach it first, so Ware has not met many in the community who are against this legislation. However, “Sometimes within an organization there may be disagreement on if and how to engage in the work of LGBT inclusion,” shesaid.

Ware and Burton agree that opposition is often due to a lack of education, which can be as simple as meeting a transgender individual and hearing their story. “We recognize that for many people it’s unfamiliar, and that’s OK,” Ware said. “Our goal is to help increase awareness.”

No structural changes are required to make a restroom gender-neutral. Sometimes it’s a matter of placing an appropriate sign on a bathroom door. When Gann repurposed one of its gendered restrooms for a gender-neutral facility, school officials did just that. “It’s about making clear that it’s an option,” Baker explained.

Keshet took an extra step and created a sign for organizations to place on the door of theirfacilities to explain why a gender-neutral restroom is important, which reads, in part, “Trans andgender expansive people are often harassed, physically assaulted, or questioned by authorities inboth men’s and women’s bathrooms if they are assumed to be in the wrong bathroom.”

Ware noted that not only transgender people benefit from gender-neutral facilities. “A father with a 6-year-old daughter and a 1-year-old daughter, who needs her diaper changed, can’t gointo the women’s room,” she said. She added that a person in a wheelchair whose caregiver is of a different gender would also find this type of a restroom helpful.

“This issue is so much about Jewish values,” she continued. “It is about working to hold sacred that each human is viewed with dignity and holiness and remembering that we have a Jewish obligation to uphold this quest.”