On February 26, Keshet, the San Francisco nonprofit that works for the full equality and inclusion of LGBT Jews in Jewish life, their friends, families, and allies, invites the community to attend Gender Shmear, Keshet’s annual Purim celebration. 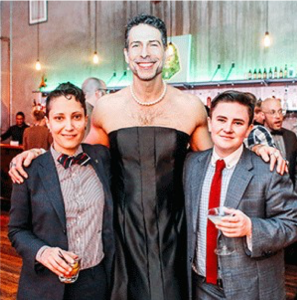 According to Keshet’s Rebecca Cariati, the Jewish holiday Purim is about “the transformation that’s possible when revealing the hidden, the covert, the hush-hush. On Purim, Jews are invited to reconcile the hidden pieces of ourselves with the revealed parts to become more whole, more true to ourselves and those who love us.”

On Purim, Jews attend Synagogue and read the story of Esther, the ancient Jewess who saved her people from imminent death in Persia, where the Jews were being persecuted by King Haman.

She said that the party will include food, drink, dancing, a photo booth, and a costume contest.

“There will be LGBTQ Jews as far as the eyes can see,” Cariati said. “Gender Smear invites us to get in touch with the taboo or undisclosed parts or ourselves, make them visible, and celebrate our whole selves through costume and cabaret.”

Cariati explained the origins of the party’s name.

“Gender Shmear is playful and speaks to the queerness of the event,” she said. “It harkens back to knowing that Purim has always been about the blurring of boundaries. Keshet chose the Yiddish word Shmear, as it is one of the many languages spoken by Jews past and present.”

In Jewish vernacular, Shmear means “spread,” as anyone Jewish or not, may know from enjoying a good “schmear” of cream cheese on a bagel with lox.

One of the Hard French music crew DJ Brown Amy will be spinning Motown, along with ’60s and ’70s funk and soul. Costumes are very much encouraged. The accompanying photos show a wide range of gender-bending options.

“Whether your Jewish, Queerish, or something else entirely, you’ll feel like a Purim Queen before the night is through!” said Cariati.