The ninth-grader’s effort to create a gay-straight alliance club at the New Jewish High School, now Gann Academy, in Waltham, Mass., is documented in the film “Hineini: Coming Out in a Jewish High School,” which was screened Monday night at the Kaplen JCC on the Palisades in Tenafly to an audience of more than 80 people. After the movie, Judy Beck, senior community strategist at UJA Federation of Northern New Jersey, moderated a discussion with Sheila Steinbach of Jewish Family Service of Bergen & North Hudson and Rabbis Shmuel Goldin, Jarah Greenfield, and Isaac Sassoon about how to treat those who are different. 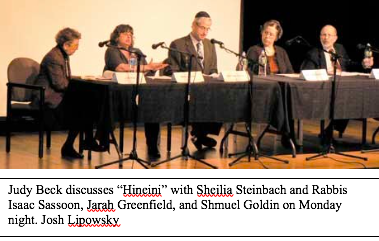 The documentary followed Izen, now a rabbinical student at the Reconstructionist Rabbinical College, as she sought out other gay students and teachers at her non-denominational Jewish high school and struggled to reconcile being gay with being an observant Jew.

Steinbach, director of clinical and adult care management services at JFS, said the community needs to teach children to use words appropriately because they can hurt.

“We need to teach our community to be ‘upstanders,’” she said. “We need to have open discussions in schools and our homes. We need to dispel the myth that bullying is a normal part of growing up.”

“I’m not sure our Jewish community is open or embraces all children in the same way,” said Sassoon, a faculty member of the Institute of Traditional Judaism in Teaneck. “We’re all somewhat responsible for allowing prejudices to be camouflaged as if they were Torah.”

He said that a few years ago, at a Shabbat table, an 8-year-old boy said that he had learned in school that Adam was white; it wasn’t until the sin of Ham that there were people of different colors.

“You can’t be mad at the messenger, because this is what he was taught; he didn’t invent it,” Sassoon said. “His mind was poisoned, [as were the minds of] all the other kids who attended that school, because that’s what they’re taught. And we do nothing.”

Contemporary Jews live within two civilizations, said Greenfield, religious leader of Reconstructionist Temple Beth Israel in Maywood. One is Judaism as it has evolved throughout the centuries, and the other is modern American society.

“My understanding of Judaism … is we constantly balance contemporary life without abandoning our traditional teachings and wisdom of Judaism,” she said. “That dance is one that creates within us an obligation to view both Jewish life and American civic life as equally important responsibilities.”

A number of gay and lesbian rabbis and other Jewish leaders are providing examples for young gay Jews, Greenfield said, but they need more positive reinforcement from the community.

“For a person who is young and suffering problems of insecurity, feeling valueless, feeling unworthy, feeling shameful of his or her identity because of the normative teachings that Judaism can impose on him or her, what he or she needs to see is his or her leaders standing up and giving confidence through examples,” she said. “We need to see that represented in our newspapers, on our websites, in our synagogue bulletins with the photographs of happy and fulfilled and secure lesbian, gay, transgender, queer adults who have come through the hard times, are Jewishly engaged, and continue to advocate for the safety of their children.”

Without question, said Goldin, religious leader of Cong. Ahavath Torah in Englewood, children should be made to feel comfortable and the Jewish community needs to teach children how to feel good about themselves without making others feel bad. “It is a fundamental failure,” he said, “that [the community] does not teach our children what it means to be a mensch.”

“Our community and the Torah maintain that all individuals are meant to be treated with respect,” he said. “At the same time, I and Orthodox people are committed to Torah law. How do I maintain both?”

“We have to teach our children there is a difference between a person and a lifestyle choice,” he said, adding that he firmly believes that being gay is not a choice. He compared his views on homosexuals to his view of someone who drives to his synagogue on Shabbat. That person is welcome to participate and given honors during the service, despite how he got there, Goldin said. If, however, that person approaches him and flaunts the fact that he drove to shul on Shabbat, Goldin said, he cannot allow the man an aliyah.

The Talmud says that sexual topics should be discussed one-on-one, Sassoon said, but in order to teach respect, there needs to be discussion. “Silence is the great destroyer,” he said.

Goldin pointed out that in this and similar discussions he has found himself to be the odd man out because he represents the Orthodox community, which, he told The Jewish Standard afterward, is the most torn on the issue of homosexuality.

“If you’re framing it as let’s be inclusive, let’s include everyone, that’s easy for those who don’t have the tensions that I have as an Orthodox rabbi. So I hope that came out of the discussion and people understand that,” he said.

Greenfield told the Standard that she is more and more gratified every time she and Goldin appear together to discuss the issue of homosexuality, but she still called for more conversations across denominational lines on the topic.

“I do perceive still a skewed emphasis on the Orthodox perspective and the place of LGBT Jews according to traditional teachings,” she said. “I still hear it characterized as a struggle. I’d really like to start to hear people shift their understandings so they understand that LGBT life as a Jew is full and is ripe and is joyous, and isn’t only a struggle with tradition. Tradition has lots of room for evolution.”

The screening was organized by the JCC’s Judaic and teen departments, UJA-NNJ’s Synagogue Leadership Initiative, and JFS of Bergen & North Hudson. Screenings at the other JCCs in the area are in the works, organizers said.