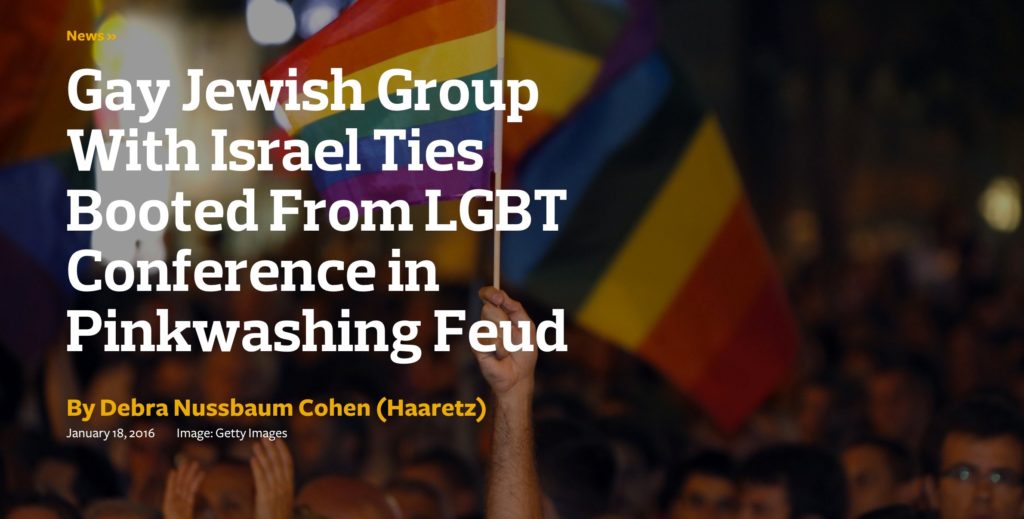 A group of American and Israeli LGBTQ Jews that was scheduled to appear at the largest conference of Lesbian, Gay, Bisexual, Transgender and Queer activists in the United States this week has been booted from the event because of pressure by anti-Israeli activists, the group says.

U.S. nonprofit A Wider Bridge, which builds connections between American and Israeli LGBTQ Jews, was set to host a reception with leaders of Jerusalem’s Open House at the Creating Change conference, which is scheduled to take place in Chicago January 20 – 22.

Last year the gathering, which is convened by the National LGBTQ Task Force, had 3,800 people attend.

Conference organizers had months ago approved the proposal by A Wider Bridge to hold a reception following Shabbat services on Friday night. The American organization builds connections between U.S. and Israeli LGBTQ Jews and was hosting the leaders of Israel’s premier gay organization, the Jerusalem Open House, said Arthur Slepian, A Wider Bridge’s founder and executive director.

“Sue told us our reception was being cancelled for reasons of safety and security but there was no evidence presented or elaboration on any security issues,” Slepian told Haaretz. “Nor were we given any opportunity to try to resolve them if there were any. Sue told us the conference would not publicize or communicate our event in any way.”

In the day or two before that call, Slepian and others saw one Twitter account holder slam their presence as “pink washing,” or an attempt to improve Israel’s image by touting its progress on LGBTQ issues. There had also been a blog post by a long-time opponent of A Wider Bridge denouncing their presence.

“We couldn’t imagine that it would result in this outcome,” Slepian told Haaretz. “It sounds to us like capitulation in the face of intimidation by a small number of very loud anti-Israel activists in the community who did not want to see us have any part of the conference.”

“It is outrageous. It is censorship, it is bullying, it is giving in to this new model that some people have if you disagree with some point of view it’s not enough to disagree but you have to deny them any platform to speak and be heard,” he said.

“The National LGBTQ Task Force caves to extremists,” said A Wider Bridge in a statement on its website and Facebook.

A petition started on Change.org called on Creating Change organizers to reverse their decision and apologize to A Wider Bridge. It garnered nearly 500 signatures within a few hours.

Staff members of Creating Change and the National LGBTQ Task Force, which organizes the event, did not return multiple email, Facebook and telephone requests for comment.

Jerusalem Open House’s new executive director, Sarah Kala, and Tom Canning, its director of development, are slated to speak at the A Wider Bridge reception.

“They’ve spent the last six months helping their community recover from a traumatic event,” said Slepian, referring to the anti-gay violence at Jerusalem’s last gay pride parade, which resulted in the murder of teenager Shira Banki.

“The story of their healing of the community would be of interest to national LGBT leaders of all types. JOH works in a very challenging city with a very diverse community, they truly are a very open organization and do very well. We thought their story was an important one to bring to the Creating Change conference.”

Seattle blogger Dean Spade, who in 2012 successfully pressured Seattle City Council members to cancel a reception there by A Wider Bridge, posted on his blog that: “A Wider Bridge aims to connect LGBT people in the US with Israel and promote the image of Israel as an LGBT tourism destination…it promotes Israeli-government funded films that portray Israel as a haven for gay rights in which Palestinians seek refuge, and it brings tours of LGBT people from the US to Israel.” Spade did not respond to multiple messages left by email and through his blog.

Barring A Wider Bridge from the conference “undermines the ability for LGBTQ activists here to support activists there, and more broadly it undermines the opportunity for constructive engagement with an aspect of Israeli society that is vibrant, dynamic and inclusive,” Idit Klein, executive director of the American Jewish LGBTQ education and advocacy organization Keshet, told Haaretz.

It’s ironic that the leaders of Jerusalem Open House have been booted from the conference because, they speak critically about issues of homophobia and heterosexism when speaking critically about the occupation and ultra nationalism, racism and militarism” in Israel, Klein said.

What’s more, JOH “serves Palestinians too,” Slepian said. “One of the leading Palestinian LGBT organizations was started as a project of JOH. They were nurtured for years by JOH and given office space, and are now their own entity. JOH is a very pluralistic, open organization and we’re very proud to be associated with them.”

“Embedded in the pink washing idea is that the only conversation to be permitted about Israel is critique,” Slepian said. “Israel is a complicated place and one of the things it gets right, by and large, is the progress it has made on LGBTQ issues.

On its website, A Wider Bridge lists as its funders several Jewish family foundations and the Jewish federations of the San Francisco Bay area (where the organization is based) and Chicago, where it recently opened an office. It gets no funding from any Israeli government entity, Slepian told Haaretz.

Meanwhile A Wider Bridge has moved this week’s reception just down the block, to a different hotel than where the conference is being held. “If there’s a silver lining here we’re going to have a lot more people now than we might have originally,” said Slepian. “At least 100 and maybe much more.”