From Tel Aviv to Boston, LGBTQ Jews show their pride

BOSTON – At home and abroad, LGBTQ Jews showed up to en mass to celebrate their community and cheer on those around them over the weekend.

In Tel Aviv, 200,000 people, including 30,000 tourists, attended the 19th annual pride parade on June 9, making it the largest ever LGBTQ event of its kind in the Middle East and Africa. The 2017 theme was “bisexual visibility,” a nod to those often ostracized by other members of the queer community, according to Noemi Seroussi, the chairwoman of the Bi-Pan-Poly Forum of Aguda, the Israeli National LGBT Task Force.

“ Before we can talk about our needs, first we have to say, ‘Hi, we’re here, and we exist,’” Seroussi told the Times of Israel.

Hiddush, a pluralistic Israeli organization, released polling results on public support for same-sex marriage in the Jewish state ahead of the parade, which showed an all-time high at 79 percent, up from 59 percent in 2009.

As many as 30,000 came out to Boston’s 47th Pride Parade on June 10. The theme was “stronger together,” which mirrored Hillary Clinton’s slogan during her unsuccessful 2016 presidential bid.

Keshet’s website listed over 40 area Jewish organizations and synagogues celebrating pride during June. According to Essie Shachar-Hill, a representative of Keshet, the organization was the first in a block of seven Jewish groups to march in the parade. 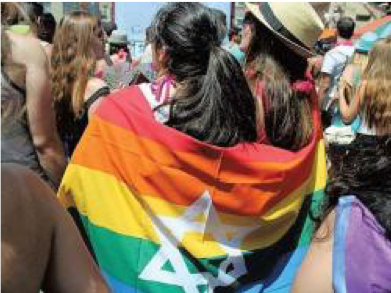 “For many LGBTQ Jews, we are used to being Jews in a queer/trans space, or as queer or trans in a Jewish space,” Shachar- Hill told The Jewish Advocate. “In both cases, it’s easy to feel like an ‘other,’ even if one of our marginalized identities is represented.

“But Keshet operates around the intersection of Jewish life and LGBTQ identities,” Shachar-Hill continued, “which can allow people to feel that they are more completely included and present in their community.”

He talked about his headmaster at a Back Bay private school expelling him because she “didn’t want any queers” at her school; and about his advocacy for state legislation to protect LGBTQ students in public schools, support marriage equality and oppose bullying.

“This year,” Cohen said in the address, “I hope to march shoulder to shoulder with my community, secure in the knowledge that, as the Jewish-American hero Harvey Milk said, ‘Hope will never be silent.’”