For Trans Jews, ‘A Community Of Our Own’

Attendees at the “Trans Jews Are Here Convening” dance at Havdalah. Photos by Samantha Davis/Courtesy of CBST

When Jillian Weiss first joined Congregation Beit Simchat Torah in 1998, she was one of the few transgender members of the LGBTQ synagogue.

Late last month, she was one of over 100 transgender and non-binary Jews filling CBST’s sanctuary on Shabbat as part of the synagogue’s first-ever Trans Jews Are Here Convening.

Weiss was a co-chair of the convening and is a board member at CBST.

“There were really no other out transgender people there,” she said of the synagogue circa 1998. “Now that it’s clear that transgender Jews are here, the vast majority of transgender Jews who are still thinking that they should stay away need to reconsider that because the world is changing.”

More than 125 people registered to attend the weekend-long event, which took place March 29-31 and which organizers said was the first conference of its size to explore the Jewish transgender experience. The convening was a milestone for transgender Jews, who have become increasingly accepted in the Jewish community in recent years. The convening boasted a long list of sponsors, including UJA-Federation of New York, Hebrew Union College, Union for Reform Judaism and the Jewish Theological Seminary.

Founded in 1973, CBST has served New York’s LGBTQ Jews for 46 years. Though transgender Jews have long been welcomed at the synagogue, CBST has recently increased its programming specifically serving transgender and non- binary Jews, now offering a weekly Talmud class for trans and non-binary students. Keshet, an organization advocating for LGBTQ acceptance in Jewish life and a co-producer of the convening, is organizing its first Shabbaton for trans and non-binary teens in November.

“It’s really hard to always see where you fit, if or where there is a place for you,” said Seth Marnin, a co-chair of the convening and chair of the Keshet board. He said the goal of the conference was simply to bring trans and non-binary Jews together in one space, “with the hopes that by bringing folks together, it would generate something and what that something is, is still to be determined.” 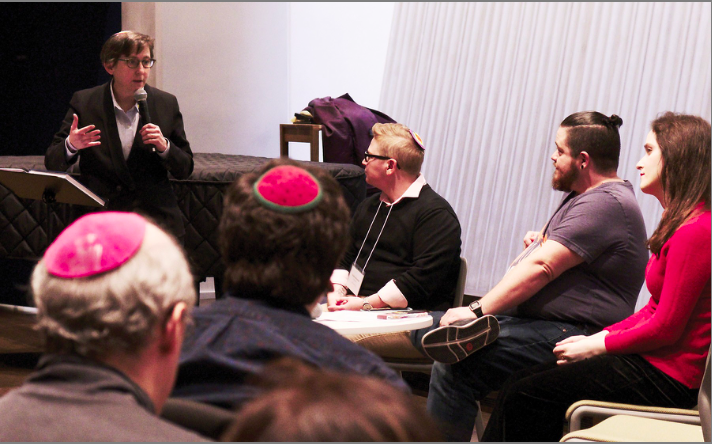 “One of the defining characteristics of being transgender in the United States and at this time is really being alone and being ostracized by communities of all types,” said Weiss. “So creating a community of our own is essential.”

“There’s so many of us who have wanted this for a long time,” said Rafi Daugherty, the convening director, who called the event “magical.”

Between Shabbat services and meals, attendees chose from workshops on topics such as trans rituals, queer readings of midrash and trans Jewish storytelling. The program, most of which was closed to the press due to the sensitive nature so the discussions, included special programming for trans and non-binary children.

Rabbi Mike Moskowitz, CBST’s scholar-in-residence for trans and queer Jewish studies, said one of the highlights of the weekend happened on Shabbat morning when he gave a Hebrew name to a trans woman who was raised in an Orthodox home. He said she found out about the conference when she Googled the words “trans” and “Orthodox” and realized there were other Orthodox trans Jews out there. “Being able to witness and to bear witness to that process of self-expression and evolution was really so holy,” said Rabbi Moskowitz.

At the concluding plenary session of the convening, Abby Stein, a transgender activist who grew up in the chasidic community, compared the transgender experience to the Passover story. “The message of Pesach that I grew up with… was that leaving a narrow place is worthy of celebration,” said Stein. “Leave your own narrow space, come out, and then go scream and celebrate.”

“Telling the story is fundamental to being Jewish,” said Rabbi Sharon Kleinbaum, rabbi of CBST. “This is a gathering that’s holy, that’s sacred, that’s standing at Sinai receiving the Torah.”

By the end of the convening, organizers were already discussing how they might make the convening a recurring event with the possibility of hosting it in other cities across the country.

“Even if folks are not able to physically be there,” said Marnin, “the more we do this, at minimum they know that other trans Jews exist.”