The showing and discussion was convened by Rep. Jay Kaufman, D-Lexington, who had recently seen the documentary.

“Being part of the legislature that affirmed same-sex marriage, it was very important to me that people understand that this isn’t just a legal change, but has very deep meaning to our neighbors and friends and family,” Kaufman told the Advocate after the screening. “This was one powerful story that reflected the power of a larger story.”

The showing coincides with the date two years ago when Massachusetts became the first state in the union to grant same-sex marriage licenses. It also corresponds to stepped-up lobbying efforts by activists on both sides of the gay marriage issue ahead of a July 12 vote on a constitutional amendment that would ban gay marriage. The amendment would have to be passed by 50 votes, by two consecutive legislatures, for the proposal to go on the 2008 ballot.

However, in his decision to invite lawmakers to view the film, Kaufman discounted current political maneuvering on Beacon Hill.

“I think the film is a celebration of one young woman’s struggle and success, and that is much more important and more enduring than any attempts to turn the clock back,” he said. 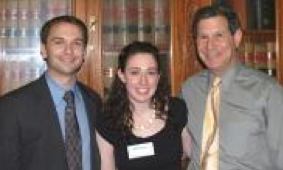 “Hineini,” which had its debut at last fall’s Boston Jewish Film Festival, depicts Izen’s quest to establish a gay student group at the Gann Academy-New Jewish High School in Waltham and the attempt by students, faculty and  administrators to reconcile Judaism and homosexuality.

After the screening, which was attended by about a dozen lawmakers as well as several Jewish community leaders, the filmmakers and the state’s one openly gay representative, Carl Sciortino, D-Medford, joined Izen in a panel discussion on the film.

Sciortino noted that the message conveyed by the documentary was important in light of a recent move by Gov. Mitt Romney to restrict the activities of a gay and lesbian youth advisory commission.

Izen, who recently graduated from Brown University and will be on the board of the school’s Hillel next year, singled out the role of Keshet, the Boston-based Jewish gay and lesbian organization that encouraged her to form the student group that produced the documentary.

“Having this organization that was willing to help was the catalyst for this,” she said. Izen’s next step? Rabbinical school.