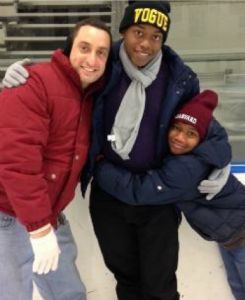 Last June, I celebrated Father’s Day in Miami with my two boys, ages 8 and 17, as we heard the news that a Jewish lesbian named Edie had triumphed against the Defense of Marriage Act. Although I grew up in the Boston area, I had lived in Miami for the better part of two decades and was working for the Greater Miami Jewish Federation.

While living in Florida I became a foster parent in a time and place where gay men and women were forbidden from adopting children. The law was struck down in 2010, and I adopted my longtime foster son in 2013.

And so last year I stood as a single parent, a foster parent and a gay Jew living in a state where marriage equality is still an unachieved dream. I stood with my two boys holding a sign with a rainbow-colored Star of David, teaching them the importance of fighting for civil rights for all people.

Around that same time, I was emailing with Idit Klein, the executive director of Keshet, about possibly interviewing for a job in Boston. Idit wanted to make sure I knew the position would require me to move.

I wrote back to her:

“I am aware. I saw the position the first day you listed it, but didn’t apply immediately because the position is in Boston, and I am a single gay dad of two wonderful boys who may or may not be too excited about a move. Also, I am very happy at my current job. But I love Keshet and the work you do, and I think it is so important that I knew if I did not apply, I would regret it. I am from Boston originally, and much of my family is still there, so in many ways Keshet would be coming home.

“I would not even begin to consider trading sunny Miami for Boston for any other organization. Keshet, however, is different. Your mission is my every day. Both professionally and personally, I live my life on the intersection of the LGBT and Jewish worlds.”

So June is here again, and it’s Father’s Day and Pride Month. Though it’s only one year later, much has changed. Although I’m still single, I’m proud to once again call Boston home, and to have spent the past nine months working at Keshet. I’m proud to be working to create the Jewish world I want my children to inherit. (And I’m proud I survived the winter—barely.)

I have a 9-year-old who is so excited to go to Boston’s Jewish Community Day School that every day before we say Modeh Ani, our morning prayer, he asks me, “Is it school today?” I’m proud that my 18- year-old was accepted at Berklee College of Music, though he’s deferring for a year.

I live 1,475 miles closer to my dad, who inspired me to want to be a father in the first place, and who taught me how to pass on my values, religion and pride to my sons.

And I am blessed to go to work every day, knowing that the work of LGBT inclusion is making stronger the Jewish community about which I am so passionate.

James Cohen is the director of development at Keshet, an organization dedicated to the full equality and inclusion of lesbian, gay, bisexual and transgender Jews in Jewish life. He is the proud father of two boys.