When Sasha Goldberg thinks back to coming out at 14, she recalls the things that made the process easier than it could have been.

“My mother was very supportive, and I was at the Latin School of Chicago [prep school], and they were very supportive,” she remembered, noting that she started the school’s first gay- straight alliance. “I wouldn’t say it was easy to come out at 14, but … that made a world of difference.”

Goldberg is thinking about support as she dives into her role at the helm of Keshet’s new Bay Area office. A national organization based in Boston, Keshet seeks to ensure that gay, lesbian, bisexual and transgender Jews are fully included in the Jewish community.

The new office — which began sharing space with UpStart as of June 1 — is a result of Keshet’s 2010 merge with Jewish Mosaic, a Denver- and San Francisco–based Jewish LGBT group.

While Goldberg’s position and office at 332 Pine St. in San Francisco are new, she’s no stranger to the local LGBT Jewish community. A Bay Area resident for over a decade (she has lived in Oakland for the past year), she holds a master’s degree in Judaism from the Graduate Theological Union in Berkeley.

Before joining Keshet, she was associate director at Nehirim, which runs retreats for LGBT Jews; she’s also served as a consultant to educators on LGBT issues.

Still, she says, she’s excited to have landed at Keshet — because there’s so much more work to do.

“One of the wonderful things about the Jewish community is a sense of liberalism, dedication to justice, and I think that is why many people are drawn to Judaism,” she said. “One of the challenges is that while there continues to be an embracing of social justice values and tikkun olam, when it comes to LGBT issues there’s not always a sense of nuance. 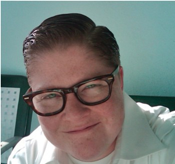 “Maybe we say it’s OK for two domestic partners to have a commitment ceremony in our shul, but we don’t quite grasp the nuance of gender and sexuality and the coming out process,” she added. “There continues to be a divide between acceptance on one hand, and celebration and true understanding on the other.”

Martin Tannenbaum, the newly elected chair of Keshet’s board of directors, agreed.

“San Francisco has a very vibrant, active queer population, and the Jewish community has been a leader in a number of ways: The federation was the first to have an LGBT alliance, Sha’ar Zahav has been around for 30 years,” Tannenbaum said, noting that his husband was a former president at the LGBT congregation.

“Having said that, our vision of a fully inclusive community — even in San Francisco, that still falls away from the mark. There are so many opportunities to forge connections, to build on the groundwork that’s here.”

Tannenbaum grew up in Salt Lake City, an area he jokingly refers to as a “hotbed of Judaism.” He said his faith was important to him from a very young age.

“My father was a founding member of our Jewish community center, and I was very involved in [the national Jewish youth organization] AZA,” he said. “When you don’t grow up in a mainstream area with a lot of other Jews, it becomes that much more central to your identity.”

Tannenbaum moved to Boston, where he lived for almost 30 years, and built a career working at various civil rights nonprofits. But it wasn’t until he was in his 40s that he began to see his activism as that of a gay Jewish man.

“I went to see a screening of ‘Hineini’ [a 2005 film about a student coming out in a Jewish high school, co-produced by Keshet], and it was honestly the first time it had occurred to me that I could blend my Jewish and gay identities,” Tannenbaum said.

He established a home in San Francisco with his husband, Alex, not long after; he now considers himself bicoastal, teaching at Boston University and developing programming at Jewish Family and Children’s Services in the Bay Area.

Both Goldberg and Tannenbaum say they’re energized by changes in the national conversation about LGBT issues, and by the chance to help shape that dialogue at Keshet.

“I do see a consciousness shift among the younger generation right now,” Goldberg said. “And yet, I think sometimes people have the best of intentions, but they don’t know how to have the hard conversations. I think Keshet can help with that.”