Educators learn ways to welcome GLBT Jews into the community 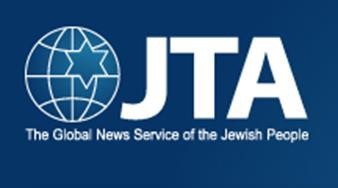 ATLANTA (JTA) – Let’s say you get a memo from work, a Jewish organization, instructing you to leave home any part of your identity that doesn’t conform to Jewish tradition. Sure, there’s room for interpretation. But let’s just say you’re gay. Or lesbian. Or transsexual. And you’re pretty sure you get the subtext. Then what?

This was one of the many scenarios posed to 35 Jewish educators in Atlanta this week at the first Hineini Education Project National Training Institute. The institute is a program of Keshet, a Boston-based group that advocates for the inclusion of gay, lesbian, bisexual and transgender Jews within the community.

So what were the answers?

One woman said she would be energized to fight back.

But generally the answers described feeling deflated and abandoned.

The point, said Andrea Jacobs, Keshet’s director of education, is that these messages don’t always come in a clearly typed letter, they can be subtle. But the endgame alienates and punishes GLBT Jews, and puts them at “risk of self-destructive behavior,” said Jacobs, who led the three-day workshop here.

Keshet has offered sensitivity-training workshops to Jewish institutions since its founding seven years ago, but the institutions have shown greater interest following its 2005 film “Hineini,” which detailed a girl’s struggle to create a gay-straight alliance at her Jewish high school. 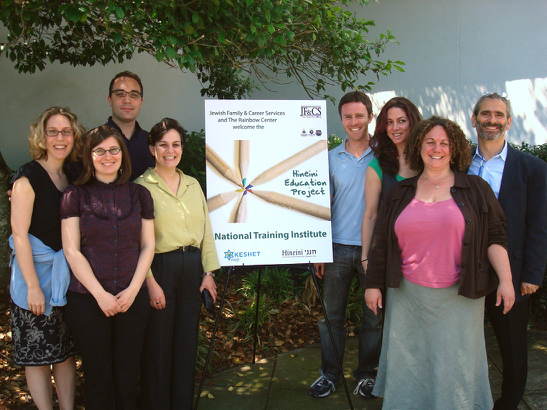 Educators from across the country staffed the Keshet conference in Atlanta May 18-20, 2008. Photo by TobiAmes.

So the group decided to broaden its mandate.

“A commitment to long-term sustainable change is not about bringing in an outside organization,” Jacobs said, but “building the leadership and the knowledge base within a community so that they can take ownership of it and integrate it and incorporate it into their existing practices.”

With a new curriculum resource guide, training manual and ideas for activities, Keshet is hoping to equip communities with the tools to become more inclusive while providing a national network of educators to consult.

The Hineini institute, funded through grants from the Charles and Lynn Schusterman Family Foundation, the Arcus Foundation, the Hadassah Foundation and others, will be followed by training in Cleveland in July and two other regional centers next year.

Jacobs said the attendance at the Atlanta institute exceeded her expectations. It represented a broad mix of Jewish educators and a close split between those identifying as GLBT and those Keshet refers to as “straight allies.” She said she had not heard of any resistance to the effort.

Several of those attending the training here already worked in GLBT education but found new program ideas and support. Others came to the conversation with little background but great need.

“We are confronted with issues like this all the time involving our students and their families,” said Evie Weinstein, the executive director of the Bureau of Jewish Education in Buffalo, N.Y., which operates community programs for adults and children.

She cited such examples as children using the word “gay” to insult each other and a high school student who decided to come out of the closet during class.

Weinstein said she needs to provide her faculty, which represents the range of Jewish movements, with ways to teach these issues.

“It’s upsetting to me when people would be non-welcoming to any community,” she said. “If they’re disabled or if they’re gay or whatever the issue is, I don’t think we have the right ever, ever to turn somebody away or make them not feel welcome.”

For some of the educators, particularly those who came of age when the subject was more taboo, unwelcome feelings are all too familiar.

Gus Kaufman, a 61-year-old psychologist, recalled that as a Davidson College student in North Carolina, he would wish on the stars, “God, make me not homosexual.”

Even though as a volunteer he has lectured to gays and lesbians about finding the “courage and the support to be yourself,” Kaufman said he doesn’t always out himself, particularly in his work for the state of Georgia training those who work with batterers. He said he doesn’t want to alienate anyone or risk his credibility.

Meanwhile, Kaufman laments that he cannot marry and bring his Filipino partner to this country due to the Defense of Marriage Act.

Alex Coleman, 58, began life as a woman and said he put off the sex change he underwent for as long as possible. The Boston psychologist likened the experience of living and being perceived as a woman to that of a Jew who is forced to wear a cross.

Coleman says most people, even gays and lesbians, don’t understand the particular hardships of transgenders. For example, a woman dressed as a man might be asked to leave a women’s bathroom, but entering the men’s bathroom could be dangerous.

He volunteers for Keshet and lectures to Jewish and non- Jewish groups with his story. But Coleman also acquired skills here, learning from Rabbi Steve Greenberg, the first openly gay Orthodox rabbi, how to “ground” issues of sexuality and gender in Jewish text.

Rebecca Stapel-Wax, the director of The Rainbow Center, a GLBT support group within Atlanta’s Jewish Family and Career Services, said her project may have gained a greater foothold in town as a result of the training institute.

Stapel-Wax said she met people at the conference who she had been trying to work with for years. She said that since an out-of-town group like Keshet drew attendees from across the country to tackle this subject, perhaps they saw an important opportunity.