Do Not Stand Idly By – ATY March and Rally

On Tuesday evening we witnessed an amazing display of empowered youth at Tel Yehudah – the national leadership camp of Young Judaea. This was not a staff sponsored or staff run event. Campers in our Hadracha (leadership) program approached staff and asked for permission to hold a LGBT Rights march and rally in camp. Most of these campers had been involved in one of our Hadracha Tikkun groups – a program in which campers select an issue of importance to lobby on during their trip to Washington, D.C. (Other issues included nuclear Iran, animal rights and poverty). We take very seriously the Jewish imperative of “tikkun olam” – fixing the world.

This group of campers wanted to draw attention to the issues of inclusion and acceptance of LGBT youth in our communities and in our society. Together they held a march against homophobia and for acceptance on Tuesday evening. Around 50 campers participated in this camper led march which included signs and the chant: “Hey Ho, Homophobia has got to go.” At the end of the march there was live music. 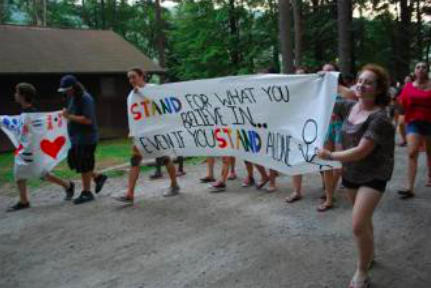 After a camp-wide BBQ dinner, there was a tremendous thunderstorm at camp. For the safety of the campers, we moved them all into the dining room where they sat on the floor. A few campers, and then staff members, got up to speak to the camp about personal experiences of discrimination because of sexual identity or about friends and schoolmates they lost to suicide as the result of bullying. These were powerful and personal speeches. A room with over 600 people was completely quiet and still as their friends called on each other to prevent bullying and promote a more accepting and inclusive society. I am proud that our campers understand the very important Jewish value of protecting the rights and dignity of each individual and the Jewish imperative of acting in the face of injustice.

This past year Jewish organizations across the political and religious spectrum (including diverse youth movements such as NCSY, USY, NFTY, Young Judaea and BBYO), pledged to speak out against homophobic bullying and intolerance. Tel Yehudah, along with Young Judaea, Hadassah and hundreds of synagogues and organizations were signatories to Do Not Stand Idly By: A Jewish Community Pledge to Save Lives:

As members of a tradition that sees each person as created in the divine image, we respond with anguish and outrage at the spate of suicides brought on by homophobic bullying and intolerance. We hereby commit to ending homophobic bullying or harassment of any kind in our synagogues, schools, organizations, and communities. As a signatory, I pledge to speak out when I witness anyone being demeaned for their actual or perceived sexual orientation or gender identity. I commit myself to do whatever I can to ensure that each and every person in my community is treated with dignity and respect.

I believe that on Tuesday night the TY community made good on this pledge.