Coming out at Tufts University 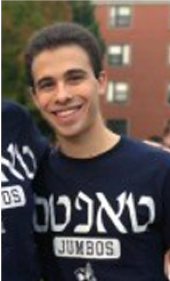 Life in the closet is a play, and it’s up to you when the curtains close.

For me, that moment came my freshman year at Tufts University. It was several days into the community service pre-orientation I had signed up for, FOCUS (Freshman Orientation Comm Unity Service), and my FOCUS family—as our group of 8 freshman and 2 leaders were called — had just gotten falafel for dinner. A group of us were talking with one of my FOCUS leaders, and the topic of sexuality came up.

Discussing a Jewish friend of hers, my FOCUS leader remarked how she felt that there weren’t that many gay Jews out there.

Suddenly, time slowed down in my head. Was this the moment I would finally talk about my sexuality publicly? I had knownSugbosicnrigbeinmtoe! Tufts that I was going to “skip” the coming out process as much as possible. I had already told my family and my best friend and I didn’t want to come out afterwards in the traditional sense. I wanted to go to Tufts as someone who was out and let everyone else just find out (it’s much easier than it sounds when you had a graduating class of 48—word travels fast). But now that the perfect moment had presented itself, I hesitated.

And then I spoke: “As someone who’s both gay and Jewish…” The rest of the sentence didn’t matter; from there on out, I was out.

Being out in college was not like I expected. While you’re in the closet, your sexual orientation becomes one of your most important identities; yet when I came out at Tufts, in many ways, my sexual orientation became inconsequential. Tufts is not only queer-friendly but has a lot of queer students. I was no anomaly and people’s sexual orientation was just another characteristic among hundreds of others.

Even at Hillel, my sexual orientation was not only accepted but embraced. After attending a Jewish Day School for 13 years where there was no support for queer students, “that’s so gay” was thrown around daily, and homophobic remarks often times went unchallenged, it was a pleasant surprise to find a Jewish community that not only welcomed queer students but even had programming focusing on the intersection of Judaism and queerness. This past spring, I was elected as president of Tufts Hillel, adding to a sizable list of queer Jewish Hillel presidents at Tufts.

As great as my experience has been overall, there are still moments where I am reminded that Tufts is not as queer friendly as it may sometimes seem. Last year, Tufts passed a new policy allowing religious groups to apply for exemptions from our non-discrimination policy when selecting their leadership criteria, consequently allowing religious groups to forbid queer students from running for leadership positions.

In addition, while my experience overall at Tufts has been great, it’s always important to remember that unfortunately, the queer friendly atmosphere at Tufts is not a microcosm of the larger United States. I was reminded of this just last year, when I returned to New York right after a string of high profile anti-gay hate crimes. My Tufts gay pride and “I like Pro-Choice Boys” pins, which normally adorn my book bag during the year, were, consequently, no longer on my bag when I arrived in NY for break.

I am so grateful to have had the opportunity to be out in college in a safe and overall welcoming community. As my senior year comes to an end in the spring I hope to take the queer-friendly atmosphere I have found here and work to make it a reality wherever I live.

This essay by Jordan Dashow, a senior at Tufts University, is reprinted with permission from the Keshet blog at My Jewish Learning.