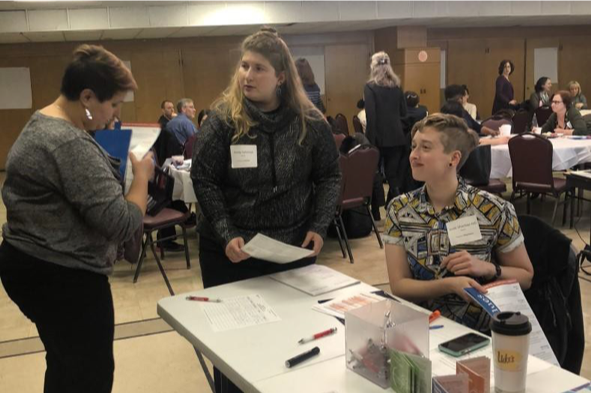 Clergy, staff, and lay leaders from 21 local Jewish organizations gathered at a LGBTQ Inclusion Summit in November at Evanston’s Beth Emet Synagogue. Keshet, a national organization working for LGBTQ equality and inclusion in Jewish life, hosted the summit to teach Chicago-area organizations how to create more inclusive and welcoming spaces for LGBTQ Jews. (This organization is not affiliated with the local JUF agency named Keshet, which provides programs for children and adults with disabilities.)

The day was split into two parts: In the morning, organizers focused on key terms and concepts relating to the LGBTQ community; later, the participants worked with trainers to develop a framework for inclusivity in their synagogues and agencies regarding programming, policy, and culture.

These frameworks are what Essie Shachar-Hill, Keshet’s Chicago Education & Training Manager, finds critical. “I think it’s particularly important for religious institutions to take these steps because, historically, not all religious institutions have been welcoming, and religious values have often been weaponized against queer and trans people,” said Shachar-Hill. “It’s important for religious organizations to be inclusive, to not only be tolerant and welcoming, but also actively inclusive for LGBTQ community members.”

This inclusivity starts with basic knowledge. The summit participants worked through a packet of exercises on gender-neutral pronouns–including he/him/his, they/them/their and xie/hir/hir–in sentences.

“Inclusion is an important value of our congregation, and we like to think that we’ve made a lot of progress in this area, including reaching out to this community, but I’m sure there are things that we don’t even know we don’t know yet,” said Rabbi Adam Chalom of Kol Hadash Humanistic Congregation in Linconshire.

During recent services, for example, Chalom noticed language in the Torah referring to the male/female gender binary, and knew “that’s not the appropriate language anymore,” but had questions about how to help his synagogue “become a welcoming Jewish home for people who identify” outside of the binary.

After learning the basic terminology, the meeting split up into groups, during which some of the clergy discussed religious imagery that can be used at synagogues. Elizabeth Berke, a cantor at Anshe Emet Synagogue in Chicago, brought up the Abrahamic image of “opening our tents” for the LGBTQ community. Keshet provided blessings for gender transitioning which focus on the Hebrew word ma’avir , which means “crossing over” and is also the root word of Ivrim , or Hebrews, the Biblical term for Jews.

Lay leaders–including Wendy Kahn and Ellen Robinson-Krumbein from North Suburban Synagogue Beth El in Highland Park, who both have LGBTQ family members–offered a different perspective on organizations’ current efforts to welcome LGBTQ community members. “We have not embraced them, and it’s time to do so. We need to educate ourselves on how to do it,” said Robinson- Krumbein.

During the afternoon discussion sessions, Keshet focused on resources to bring change to congregations going forward. “Over the course of the year, we support them by having one of our staff members check in every two months to support them, answer any questions, respond to feedback or pushback, brainstorm policy, and offer more resources,” said Daniel Bahner, Keshet’s national director of education and training.

These resources can help organizations move along the “continuum of inclusion” ranging from hostile to embracing, with steps to ensure that people feel increasingly welcome. Each organization left with action plans to meet these benchmarks.

“We’re very excited to be part of this,” said Judy Rosen, president of Temple Beth-El in Northbrook. “We knew there was a next level, but we didn’t know how to get there on our own, and being able to have the resources makes such a difference.

“We’ve had the conversation like, ‘We hung the rainbow flag, what’s the next step?’ And for us, we feel we’re warm and welcoming, but until we really answer the hard questions, we don’t know what we are,” Rosen said. “We do things for people who need physical inclusivity, intermarried couples, Jews of different colors, and this is the next level for us.”