The ancient Jewish observance of Passover is a week-long commemoration of the end of the Israelites’ centuries of slavery in Egypt, starting with a Passover Seder – a ritual meal shared by family and friends.

The Seder is one of the most celebrated annual events in the Jewish calendar – even by non-religious Jews – and its liberation theme is the focus of Queer Seder, organized by Keshet, an  LGBT Jewish group for the integration of LGBT people in Jewish life.

“Sometimes people are still in bondage if they’re not able to come out as LGBT,” said RafiDaugherty.

“Passover is very symbolic of freedom from slavery and bondage,” he said. “We go through the traditional liturgy in light of wanting to be free from oppression and homophobia.”

The Seder meal is filled with rich ties to Jewish history and belief. It includes bitter herbs representing the bitterness of slavery, and charoset, a sweet mixture of fruit and nuts representing the mortar Jewish slaves built within Egypt.

Matzo, a flat, cracker-like bread, represents the last meal cooked by Israelites as they fled the fickle Pharaoh control without time to let it rise. The Passover Seder also includes four cups of wine.

Denver’s 4-year-old Queer Seder, which was once held at the Hilel center on the Denver University campus, has outgrown its setting – and will be moving to Temple Emmanuel at 51 Grape st. this year. 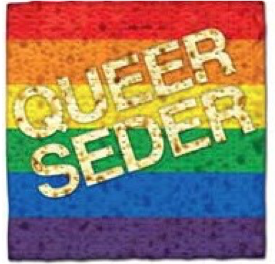 “We’ll have a traditional liturgy and prayer service of Seder with all our LGBT Jews, friends, and allies,” Daugherty said.“We’ll have a full festive meal after that.”

It’s a chance to learn about the Jewish religion from unique and welcoming LGBT perspectives, or to connect with other LGBT Jews and allies.

Anyone is invited, Daugherty said, with advance registration from keshetonline.org.