Three national Jewish LGBT groups came together to organize the “2010 LGBT Jewish Movement-Building Convening” in the hopes of fostering an organized Jewish LGBT movement. The meeting, held in Berkeley, California on June 27-29, took huge steps toward making that goal a reality. GLAAD Religion, Faith and Values staff was among the more than 100 Jewish and advocacy groups who attended this invitation-only conference. Rabbis, cantors and faith leaders from synagogues across the country attended, and Congregation Sha’ar Zahav, in San Francisco, welcomed early arrivers to the congregation’s Pride Shabbat. 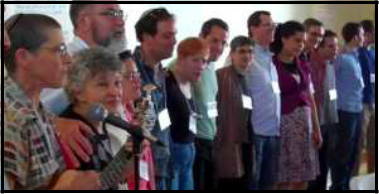 The Convening was organized by Keshet, which advocates for the inclusion of LGBT Jews in all parts of the Jewish community; Nehirim, which aims to build community for Jewish LGBT people; and Jewish Mosaic, the National Center for Sexual and Gender Diversity.

After the first full day of the conference, keynote speaker Stuart Milk told an inspirational story. Last August, as he was waiting to receive the Presidential Medal of Honor for his uncle, Harvey Milk, he was standing with Bishop Tutu of Uganda. He told Bishop Tutu of all the work he was doing for equality, to which the Bishop replied, “Do more! We must do more!” With such inspiration, the conference participants worked hard to create an agenda for change—including same sex marriage and inclusion for transgender Jews—while keeping in mind the successes and challenges of the last 40 years of Jewish LGBT advocacy.

In past decades, Reform, Conservative and Reconstructionist Jewish movements have made great strides toward the full inclusion of LGBT people. It was auspicious that the annual list of Newsweek’s 50 Most Influential Rabbis in America was released on the first day of the conference and, as usual, included a number of LGBT or LGBT-allied rabbis. Here are just a few of them: