Rabbi Laura Janner-Klausner is not your average matchmaker.

The senior rabbi of England’s Movement for Reform Judaism, Janner-Klausner is launching a matchmaking service and website that will cater to same-sex Jews, according to RNS. 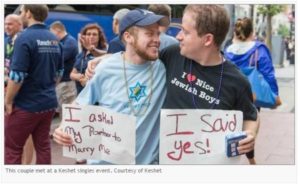 This couple met at a Keshet singles event.

The site is intended to serve as a “conduit” for lonely singles to meet one another. Though it also serves heterosexual couples, the site’s main purpose is to aid single- sex couples. Rabbi Janner- Klausner, along with several other Reform rabbis, will be the matchmakers.

According to James Cohen, acting executive director of Keshet, a non-profit that serves LGBTQ Jews in the U.S., the project seems revolutionary.

“As far as I know, there aren’t any comparable dating services to the one starting in England, and certainly not one started by a rabbi!” he wrote in an email.

Though no dating website exclusively for Jewish same-sex couples exists in the U.S., several dating websites, including Yenta and JDate, provide an option for LGBT couples. JSwipe, the popular Jewish dating app likened to Tinder, has a “really strong LGBT presence,” according to founder David Yarus.

“It’s crazy to think that there are apps out there or other services that aren’t same- sex friendly,” wrote Yarus in an email. When you sign up for JSwipe, one of the first questions you’re asking is if you’re interested in men or women, he said. “The app will dynamically adapt to your preferences and settings in real-time.”

Though he doesn’t have plans to launch an app exclusively for same-sex couples, LGBT Jews are an important part of the online dating community, he said.

In the United Kingdom, the Reform movement is only willing to marry couples — straight or gay — if both partners are Jewish.

“The point to make is that we want to help people to meet other Jews, those who are interested in living a Jewish life,” Rabbi Janner-Klausner told RNS. “Both relationships, straight or gay, can have ‘kedusha,’ holiness.”

There are 42 Reform Judaism congregations in England, Wales and Scotland, but it is not clear how many will be involved as part of the matchmaking service or when the service will begin.