During the hour-long memorial and solidarity gathering, a dozen community leaders spoke about the Jewish terror attacks that rocked Israel and the Diaspora six weeks ago: the stabbing death of Jerusalem teenager Shira Banki during the city’s Jerusalem Pride march on July 30, followed the next day by the arson that led to the murders of three members of a Palestinian family — Reham, Sa’ad and 18-month old Ali Dawabshe in Duma, a village north of Jerusalem. 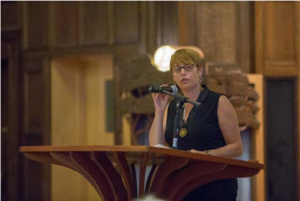 Idit Klein, executive director of the Boston-based Keshet for LGBTQ Jews and their allies, addresses up to 200 attendees at a Memorial and Solidarity Gathering at Boston’s Temple Israel on September 9, 2015 (Elan Kawesch/The Times of Israel)

The June 18 arson attack on the Galilee’s Church of the Loaves and Fishes was also cited as part of Israel’s summer of Jewish extremist violence, a maelstrom of events that caused unease in an American Jewish community divided over the Obama administration’s impending nuclear deal with Iran.

“Now is the time for all of us, no matter what our affiliation, to reflect on how these attacks were committed by our own people, and in our name,” said Idit Klein, executive director of Boston’s Keshet, a pioneer in the inclusion of LGBTQ Jews in organized Jewish life, as well as co-organizer of the memorial.

“Extremist, hateful speech gave the perpetrators permission to act,” said Klein, who recalled participating in the creation of the Jerusalem Open House — organizers of the Gay Pride Parade and a thriving LGBTQ community center — when she lived in Israel more than 20 years ago.

According to Klein, the Open House has spent up to $100,000 on security measures since the July attack, “which is more than one-third of their annual budget,” she told the largely Reform audience before requesting donations for that organization and the New Israel Fund.

The Open House and its Pride marches have been the target of religious violence before, as well as ongoing incitement from some ultra-Orthodox Jewish leaders and their publications. The same ultra- Orthodox assailant who attacked July’s march — Yishai Shlissel — also stabbed three participants in the 2005 demonstration, bring his victim count to nine, including Banki.

“Our hearts were broken by the events at the gay pride parade,” said Reverend Lucy Forster- Smith of Harvard University’s Memorial Chapter. 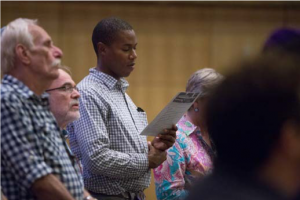 Gathered at Boston’s Temple Israel on September 9, 2015, up to 200 community members held a Memorial and Solidarity Gathering for victims of violent Jewish extremism in Israel during the past summer. (Elan Kawesch/The Times of Israel)

Along with other area clergy, Forster-Smith was in Israel on a Jewish Community Relations Council (JCRC) mission at the end of July. Having chosen to walk in the Pride march, she witnessed police tackling the blood-soaked assailant just several feet from where she’d been walking.

“I ask that we join hands as a community to ensure that everyone will live in a radical, deep shalom,” intoned Forster-Smith, who also spoke about supporting vulnerable young adults during life transitions, part of her pastoral role at Harvard. 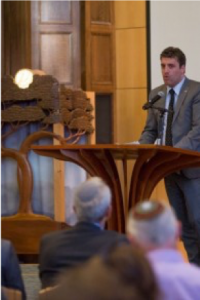 According to Matan Zamir, Israel’s new deputy consul general to New England and an “out” Israeli, the events of July filled many Israelis with anger.

Zamir reminded attendees that July 30 was Tu B’Av on the Jewish calendar, a celebration of love.

“Instead of love we got a big portion of hate,” said the young diplomat.

Calling even the witnesses to incitement “partners to this bloodshed,” Lau labeled as “racist” the adage that “a Jew does not kill another Jew.”

“A Jews does not kill another human being,” Lau said to massive applause in Zion Square, followed by his calling some ultra-Orthodox leaders “people of darkness” who “have handcuffed the Torah.”

Following the clip of Lau’s speech, JCRC executive director Jeremy Burton called for “an assessment of our souls,” in tune with the approach of the High Holidays. 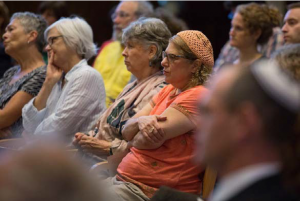 Gathered at Boston’s Temple Israel on September 9, 2015, up to 200 community members held a Memorial and Solidarity Gathering for victims of violent Jewish extremist in Israel during the past summer (Elan Kawesch)

“Our role is to come together in solidarity with the Israeli people who are trying to confront this,” said Burton, who warned against what sometimes hides behind the “inner bright light of Judaism — a darker fire that burns too hot and burns us all,” he said.

A song called “Everything Possible” was performed by Andrew Martinez, whose group — Boston’s beloved Gay Men’s Chorus — performed in Israel and Turkey earlier this summer.

To close the memorial, Rabbi Toba Spitzer recited the traditional Mourners’ Kaddish for the four victims, pointedly asking the audience to switch out the words “all the people of Israel” with “all your citizens” at the prayer’s conclusion.