As transgender activists and their supporters continue to lobby the legislature to add gender identity and expression to the Commonwealth’s anti-discrimination statutes, a number of religious institutions gathered in western Massachusetts last Thursday to show their support.

The event, dubbed “An Act of Faith,” was held at The Edwards Church in Northampton. Beit Ahavah (the Reform Synagogue of Greater Northampton), the Edwards Church, the Interfaith Coalition for Transgender Equality and Keshet organized the forum. Speakers included Rabbi Riqi Kosovske of Beit Ahavah Synagogue, the Rev. Dr. Peter Kakos, the Rev. Andrea Ayvazian of Haydenville Congregational Church, Rabbi David Dunn Bauer of Jewish Community of Amherst, and Pastor Yohah Ralph of the United Church of Christ.

The Interfaith Coalition for Transgender Equality was formed in the fall of 2007 to support the passage of a civil rights bill for transgender equality (now called “An Act Relative to Gender-Based Discrimination and Hate Crimes”) and to support education on transgender issues.

“At the time there was no organized community of faith speaking out on this issue,” Bonnie Rosenbaum, director of communications and film outreach for Keshet, a Jewish LGBT organization based in Jamaica Plain, said.

Keshet was a founding member of ICTE and currently provides the staff and organizing support for the group.

“There has never been a successful fight for civil rights in our country without the participation of the religious leaders,” Rosenbaum said. “The faith community was a powerful force in the fight for equal marriage rights. I hope we can count on our community to again heed the call for justice.”

Al-Fatiha, a group of LGBT Muslims, was also in attendance. “As a person of Muslim faith and a longtime transgender advocate, I also feel that the spiritual component of our struggle is often overlooked,” founding member Tynan Power, who served on ICTE’s initial Shura or Advisory Council, said. “The legal and survival issues we confront in our day-to-day lives are not addressed in many religious settings, and our spiritual lives are not addressed in legal and social action settings. Last week’s event sent a clear message that transgender people can and should have a respected place in our communities. It demonstrated to a diverse audience that, as transgender people, we have a role to play in our churches, synagogues, mosques and other houses of worship, whether at the pulpit, as lay leaders or in the back pews.” 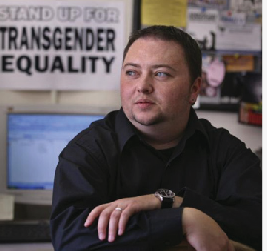 Gunner scott, director of the Massachusetts Transgender Political Coalition, remains optimistic faith organizations across the Commonwealth will continue to play a crucial role in efforts to pass atransgender rights bill on Beacon Hill.

The proposed legislation before Beacon Hill lawmakers would also add trans-specific language to the Bay State’s hate crimes laws. If adopted, Massachusetts would join 13 other states and the District of Columbia. Boston, Cambridge, Amherst and Northampton are among the more than 100 cities and counties across the country that have implemented trans-specific statutes.

“This event along with the Interfaith Coalition for Transgender Equality give a strong visible presence to opening and welcoming faith communities which counters the assumptions of our opponents that religious traditions do not accept transgender people,” Scott said.

He added he is hopeful lawmakers will pass the bill this year. “It is the job of my organization and our coalition partners to inform legislators about discrimination and (the) violence transgender people face in Massachusetts and how such legislation will educate the public that discrimination and violence is not tolerated and (should be) against the law,” Scott added.

Joe Siegel has written for a number of other GLBT publications, including In Newsweekly and Options.