Bar or Bat Mitzvah? Hey, What About a Both Mitzvah?

By The New York Times 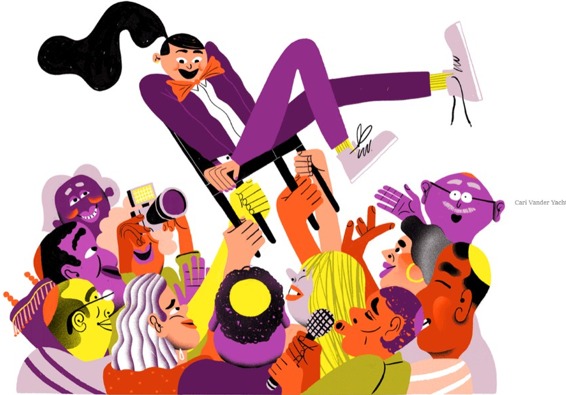 Lion is a 13-year-old who lives in Brooklyn. The middle school student identifies as pangender, a term for feeling like you are every gender at once, and likes to go by “they” because it’s an inclusive pronoun. “I can identify with male and female and others in between,” they said. “I don’t really feel masculine, and I don’t really feel feminine.”

They are also of the Jewish faith, and on Sept. 1, 2018, when they turned 13, they participated in a traditional coming-of-age ceremony: the one in which children become adults and mature members of their religious community.

Their family got the idea from a set of twins who celebrated a b’nai mitzvah. “‘B’nai’ is just the plural form of the word ‘bar’ or ‘bat,’ so we thought maybe we can use that,” said Hilda Cohen, Lion’s mother. “We didn’t make a big deal out of it. We just sort of did it.”

Like other Jewish teens, Lion led the Saturday morning service, read from the Torah and gave a Dvar Torah, a speech about the Torah portion that focused on gratitude. After the kiddush, or celebratory meal, where the venue was covered in flowers of many hues, there was an ice-cream party in the garden of the family’s Fort Greene townhouse.

The only difference was that in the invitation, the rabbi’s speech and every blessing, in Hebrew and in English, “they” was used in place of “he” or “she.”

This was a significant alteration. “If someone uses the wrong pronoun it can feel like a weight is added to your back,” said Lion. “I have a friend who is nonbinary, gender- fluid, and their parents weren’t as accepting. They still had a bar mitzvah even though they doesn’t identify as a gender. It wasn’t comfortable.”

In recent years, more people have been questioning or exploring their gender expression, including teenagers. In Jewish circles this process can coincide with the time for bar and bat mitzvahs. To make space for transgender and nonbinary teenagers, more synagogues and Jewish communities have adopted they mitzvahs (b’nai mitzvahs or b mitzvahs, as other congregations call them.)

“People want to have their whole lives reflect who they are, including major rites of passage,” said Rabbi Rachel Timoner, the senior rabbi at Congregation Beth Elohim in Brooklyn. “The traditions of Judaism adapt every generation. And this is one of the needs of our generation.” 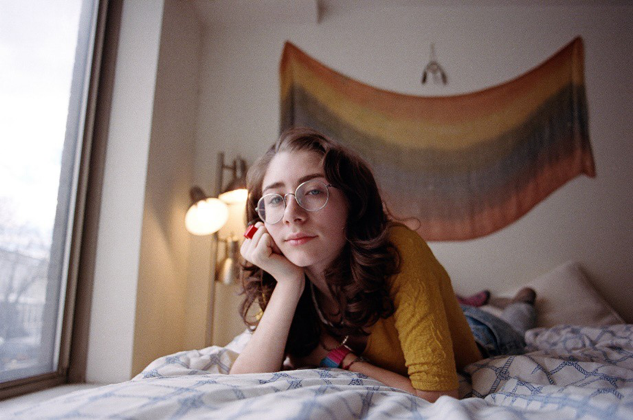 Milah Carlone is a 15-year-old who lives in New York City and identifies with the pronouns she, her, they and them. “I’m gender fluid-ish,” she said. “I’m comfortable with everything.” In April 2017, when Milah was 13, she had a b mitzvah at Romemu, a progressive, Upper West Side synagogue.

For her Saturday morning prayer service she wore a suit with a bow tie that was navy blue with white polka dots. “I thought I looked great,” Milah said. “It made me feel so comfortable.” Some guests liked it so much they gave her other bow ties as gifts.

“Rabbis are always concerned if these new customs and traditions are O.K.,” said Daniel Bahner, the national director of education and training for Keshet, a national organization that works for L.G.B.T.Q. equality and inclusion in Jewish life. Mr. Bahner said he gets at least one email a month from a clergy member regarding some detail of a they mitzvah.

There are, of course, etiquette challenges. “What do you do with family members who were expecting to get one invite, and they got another?” said Mr. Bahner.

Ms. Carlone said she had multiple relatives, especially grandparents and older cousins, who didn’t know she identified as gender-fluid before her ceremony. They learned quickly when the rabbi kept referring to the service as a b mitzvah and the teenager gave her Dvar Torah about her gender journey so far, and also arguing that God has no gender. “It was a really terrifying experience because I had all my friends from my school there too,” she said. “But I’m lucky that everyone was super supportive.

“That’s also why the b mitzvah is amazing,” she went on. “You are supposed to be growing up through this ceremony, so having this part of me in there was important.”

Mrs. Cohen, Lion’s mother, had many relatives, especially the older ones, who sent cards with the wrong pronoun. “I don’t think they are being dismissive. They possibly don’t understand it or don’t know the right pronoun,” she said, and added with a laugh: “We still cashed the check.”

More traditional synagogues encounter problems with the Hebrew language. Like Spanish, it is a gendered language, in which every noun has a masculine or feminine ending. For example, you can’t say “child” instead of boy or girl in Hebrew. So every act — blessing the teenager, addressing them, calling them up to the Torah — requires a gender specification.

Some synagogues have approached this problem by only using English, or updating English translations of Hebrew words to make them gender-neutral. But diverging from the text could take away from long and meaningful traditions if done without care, said Rabbi Tamara R. Cohen, chief of innovation at Moving Traditions, a Jewish organization that runs educational programs for teenagers and people who interact with them. (With Moving Traditions, she created a curriculum to help synagogues deal with gender issues that is currently being implemented in synagogues in Los Angeles, Chicago, New York, Boston, Philadelphia and Denver.)

There are some groups, like the Nonbinary Hebrew Project, that are working on building a new grammatical system for the Hebrew language, one that doesn’t specify gender.

“There is a lot of work going on, but I don’t know how much people will adopt it,” said Rabbi Cohen. “So many people already don’t know Hebrew as it stands.”

Then there is the Orthodox community.

In many of these synagogues men and women don’t just have different pronouns but different expectations for their bar or bat mitzvah day. In some congregations boys conduct an entire service while females have a party. Sometimes the ceremonies are only performed for the same gender (or there is separate seating), so where do gender-fluid or neutral folks land?

“We are still working on making Orthodox rabbis aware of the experience of being trans or gender nonconforming,” said Miryam Kabakov, the executive director of Eshel, a nonprofit that works with L.G.B.T.Q. Jews who grew up in Orthodox communities. “And very little happens within an Orthodox synagogue without the rabbi’s seal of approval.”

But in her opinion, change is inevitable. “It is just a matter of time before we start hearing from more parents with younger children who are facing this dilemma,” Ms. Kabakov said. “It’s a good time for Orthodox leaders to start thinking about this reality.”

A version of this article appears in print on March 28, 2019, on Page D1 of the New York edition with the headline: Celebrating the ‘They’ Mitzvah.