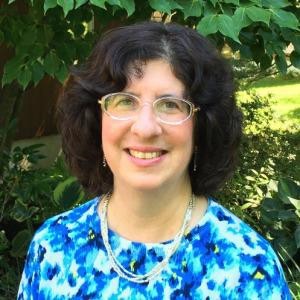 The Whole Megillah (TWM): What was your inspiration for this story?

Meryl G. Gordon (MG): When my son and son-in-law were getting married back in 2010, my cousin’s four-year-old daughter Emma (yes, that is her real name) was all excited to be their flower girl. Then one day, my cousin called, laughing, and said “Emma said she’s afraid to come to the wedding because of the Ring BEAR!” And I remembered my own daughter who, when she was going to a flower girl many years ago, told everyone, “I’m going to be a Flower and my brother is going to be a Ring Bear.” So I thought, this is so universal, this has to be a story.  And then, combined with the fact that I couldn’t find a book to buy for Emma about a flower girl at a wedding with no bride like we were having, let alone a Jewish wedding, I decided to write one. So originally it was two grooms and many versions later it became two brides. 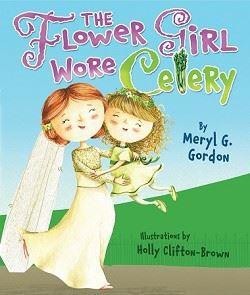 TWM: What were the challenges in writing it? The satisfactions?

MGG: I knew I wanted to write about a little girl misunderstanding all these grown-up words, and I knew she’d misunderstand about the flower girl first but would get that cleared up right away, and then would be confused about the ring bearer. Then I decided to give a gender-neutral name to the person her cousin was marrying, so she wouldn’t know there would be two grooms (later, two brides). Then I wanted one more confusion and it took me months to come up with the last thing, which was that she wouldn’t understand that celery was the name of her dress color. For my son’s real wedding, the dress color was lettuce, which gave me the idea, but “celery dress” is easier to pronounce than “lettuce dress,” and it looks funnier too.

And one of the satisfactions now is that a reader told me that her own daughter actually thought her dress would be real celery many years ago! So it was nice to hear that the celery rang true too. Another satisfaction was seeing the illustrations. I laughed out loud when I saw the drawing of the big bear with rosy cheeks and kippah holding the rings. He was much cuter than the bear I had imagined!

TWM: Do you have a critique group? Please tell us about it.

MGG: Formal critique group – no, or should I say “not yet?” But I had originally taken this story and others to a Highlights Foundation Jewish children’s writers’ workshop (where I met you) and received some good feedback there, and then stayed in touch with some of the people from that group for a while. More recently, I’ve been in contact with people I’ve met at the annual Jewish Children’s Book Writers and Illustrators conference in New York every November, who have given me valuable feedback.  And my husband, who is my partner in all of life, has been a helpful reader with constructive suggestions.

TWM: As a first-time author, how did you find publication?

MGG: Keshet, a national organization that works for inclusion of LGBTQ people in Jewish life, ran a contest in 2011 (in cooperation with Kar-Ben) for a Jewish picture book that included LGBTQ family members, since there were none at the time. It just so happened that I had recently completed my manuscript when I became aware of the contest and I submitted my story. The first-place winner was The Purim Superhero, which Kar-Ben published in 2013. My manuscript apparently won second place, and after The Purim Superhero was so well received, Kar-Ben was ready to do another LGBTQ book, and offered me a contract in 2014. So, thank you, Keshet!

TWM: Do you have any favorite books of Jewish content? Who has inspired you?

MGG: I have so many favorites! As a child, I loved the All-of-a-Kind Family books. And there wasn’t much else in Jewish children’s books back then. The books I loved best to read to my children were Eric Kimmel’s Herschel and the Hanukkah Goblins and The Chanukkah Guest, Margot Zemach’s retelling of a Yiddish folktale, It Could Always Be Worse, Marilyn Hirsh’s retelling of a Talmudic story, Joseph Who Loved the Sabbath, Isaac Bashevis Singer’s Why Noah Chose the Dove (illustrated by Eric Carle), and our beloved Chanukah baby book, Rainbow Candles. Also, I loved Lights by Yehuda and Sara Wurtzel and my kids loved The Animated Menorah: Travels on a Space Dreidel by Rony Oren and Ephraim Sidon when they were a little older. More recent Jewish children’s books I love are Tilda Balsley’s Oh, No, Jonah, Jacqueline Jules’s Sarah Laughs, and Phoebe Gilman’s Something from Nothing. All of these authors inspire me!

TWM: What’s next for you?

MGG: What’s next? I hope another book! I’m working on a few things. One is a retelling of a less-well-known Bible story that inspires me. Another is a holiday story. And I’m also working on some non-fiction, computer-related “stuff,” since I have a master’s degree in computer science.

Meryl was born in Brooklyn, New York and raised on the south shore of Long Island near the beach, which is her favorite place in the world. She graduated from Yale University with a B.A. in Mathematics and Philosophy, as well as certification to teach math. She holds a master’s degree in Computer Science from Iona College and is a former computer programmer/analyst. Meryl’s passion is supporting, promoting and advocating for lifelong Jewish education. Meryl and her husband, David, live in Connecticut, where they raised their three now-grown children and where Meryl has been active as a volunteer in the Jewish community, serving on numerous committees and boards, and as a tutor in the public schools.