NEW YORK (JTA) — One of the country’s largest Jewish-centric foundations is making a push to help the few national and dozens of local and small-shop organizations focused on Jewish lesbian, gay, bisexual and transgender issues form a movement.

The Charles and Lynn Schusterman Family Foundation is a major funder behind a June 27-29 conference of more than 100 LGBT national and local organizations and congregations set for Berkeley, Calif. 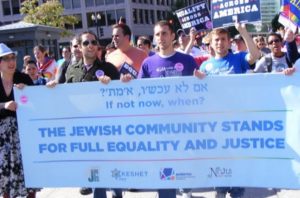 Jewish contingent displays solidarity with the LGBT community at the March for Equality in Washington, October 2009. (Courtesy of Keshet)

The conference will be led by three national Jewish LGBT organizations: Keshet, which works for inclusion of LGBT Jews in Jewish organized life; Nehirim, which builds Jewish LGBT community; and Jewish Mosaic-The National Center for Sexual and Gender Diversity.

“We believe it is important for the strength of the Jewish community to be welcoming to the full diversity of our community, and not marginalizing. We think it will strengthen us,” the national director of the Schusterman Foundation, Lisa Eisen, told JTA’s philanthropy blog, The Fundermentalist. “In terms of the convening, we feel the beginnings of a movement have already been happening organically. Now we are responding to a need we heard from LGBT synagogues and local organizations. It was time to bring everybody together.”

Leaders of the gathering hope the LGBT community can start to discuss becoming an actual movement and perhaps set some priorities for the Jewish gay sphere, including pushing same-sex marriage and more inclusion of transgender Jews, a segment that is marginalized even within the gay community.

Keshet executive director Idit Klein says this appears to be an important moment for the LGBT sphere because of a confluence of events both inside and outside the Jewish world.

Outside the Jewish world, the equal marriage movement has pushed gays into the mainstream — Klein says that few people can say now that they are not related to or know somone who is gay. Inside the Jewish world, she says, a watershed moment came in December 2006, when the Conservative movement’s Committee on Jewish Law and Standards gave its seminaries and cantorial schools the right to ordain openly gay students for ordination, and allowed rabbis to perform same-sex wedding ceremonies.

The Conservative movement’s primary rabbinical school, the Jewish Theological Seminary of America, dropped its ban on gay rabbinical students, as did the Los Angeles-based Ziegler School of Rabbinic Studies, though some international schools have yet to change their policies.

Across the country, synagogues have debated — and in many cases now allow — same-sex marriages. And now, for the first time, philanthropic funding seems to have really started to open up to the sector.

“Certainly in our early days it was hard to find foundation support,” said Klein, who counts the Schusterman Foundation as her biggest funder. “But at this point we are funded by many foundations. There is just a sense that this is an issue now on the radar screen of the Jewish community. It doesn’t mean the crackle on the radio is always being responded to, but it’s become an issue that funders have taken on, including funders who do not have gay kids or who are not gay themselves. This is an important shift.”

LGBT rights are something of a personal issue for the Schusterman Foundation’s benefactor, Lynn Schusterman, who had a childhood friend commit suicide because he was afraid of coming out of the closet, Eisen said.

This already has been a significant year in the Jewish LGBT organized world with Neherim and the National Union of Jewish LGBT Students announcing their recent merger. And there are rumors that more mergers among the larger LGBT groups, as well as coalescence, are in the offing.

Eisen said the Schusterman Foundation — a major player in the formation of Repair the World, an organization that seeks to create a movement from the plethora of Jewish service learning programs — at this point is not trying to form a similar quasi-umbrella body for LGBT groups. But the foundation is attempting to spur more financial support for Jewish gay causes.

Several other foundations, such as the Richard and Rhoda Goldman Fund, are helping to sponsor the Berkeley convening. But even more significant, the gathering will include a funders roundtable of about a dozen foundations and individuals who are interested in funding the gay Jewish inclusion movement.

“Part of our goal is to broaden this so other philanthropists and other community leaders become aware of the needs and make it part of their priorities,” Eisen said.

I spoke with [Idit] Klein about how the Jewish federation system was doing in terms of reaching out to the gay community.

Some Jewish federations have been extremely proactive in terms of reaching out, both in terms of viewing it as a necessary community from which to fund raise and in terms of funding LGBT programs and efforts for inclusion.

The federation in San Francisco, for instance, has a dedicated LGBT outreach program and now sponsors queer events. The Combined Jewish Philanthropies in Boston, where Keshet is headquartered, has been extremely proactive. The UJA- Federation of New York, in a city that may be home to the largest gay and lesbian Jewish population, commissioned a survey of the area’s LGBT population, but at this point the federation does not have a dedicated outreach program, Klein said. And the federations in Cincinnati and Washington also are in the early stages of creating programs, she said.

“Any federation that hasn’t engaged with this issue is just like those that have not engaged in interfaith family issues,” Klein said. “It is not being responsive to the needs of the full Jewish community, and I think that is changing.”

Klein refused to single out federations that have not yet opened their doors, but she did say: “There are federations where this is absolutely irrelevant or viewed as detrimental to the Jewish community. There are federations where in some cases being dominated by more traditional elements in the Jewish community makes it easier for them not to engage. But often people will hide behind or under the guise of ‘We are pluralistic and therefore we don’t want to offend the Orthodox’ — so they don’t engage, when in reality they just don’t want to engage. That requires some courage and risk.”