A tale of two Hineini tweets

In the past week the word Hineini appeared to me, much like the voice that evoked that response from Abraham, in two stories I was following on twitter. One I’m sure many of you have heard about by now after Obama’s sermon (I mean speech) at the URJ biennial. The other was after reading a piece by Idit Klein on Hanukah as the paradigm for publicizing our difference and what’s Jewish about coming out including the mention of the film Hineini: Coming Out in a Jewish High School. 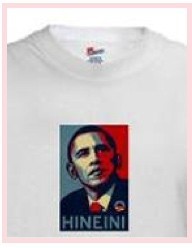 I couldn’t help but feel inspired as Obama reeled off phrases like “Tikkun Olam” and “It is not our duty to finish the task, but nor are we free to desist from it”. I spend my working life together with others highlighting the Jewish imperative that pushes us, grounded in our particular heritage, to pursue Justice with and for all humanity. It was amusing and awesome to see the world’s most powerful man articulating this message and doing so by commentating on that week’s Torah portion which tells the story of Joseph.

Yet it is in Joseph’s answer of Hineini, his Hitvada’ut (revealing himself or coming out) to his brothers and in the other Hineini tweet that I found greater inspiration and also a reminder of times when I haven’t answered ‘Here I am’. (For more on the notion of Hitvada’ut as coming out see Brit Hitvada’ut: Covenant of Coming Out)

I’ve been volunteering and working in youth, community and social action roles for over a decade, yet it is only in the last year or so that I have felt comfortable mixing my public life with the personal concerning issues of social justice and sexuality. When I have been asked why I do the work I do or what motivates me, I have shared my experience of coming from a mixed Indian-Ashkenazi Jewish home where my my mother and her family were immigrants and my father’s family pretended at first they were Israeli rather than admitting they were Indian Jews; of always being told as a child my mother can’t be both Indian and Jewish; of finding meaning in Jewish values and narrative, and our collective memory of ‘being the stranger’ or persecution. This is all true and still a huge part of my identity, but I was only sharing half the story.

Growing up struggling with (and enjoying) discovering I was queer had a profound effect on how I see the world and has informed much of how I approach and seek to combat sexism, racism, homophobia and attempts to reduce human experience and expression to simple and fixed ideas (Live in the Grey!)

Yet when I worked directly with young people, and more importantly training young leaders who looked to me and my peers to set an example, I was still not comfortable being out. I was living openly as a bisexual man at university but I didn’t bring this to my youth work, maybe avoiding accusations of ‘pushing an agenda’ or more likely because I was not yet fully at ease with myself. Nevertheless, I look back and regret that I did not offer a positive role model to youth leaders and young people and challenge some of the homophobia and misogyny I encountered. Even now, especially in work and relationships with Orthodox Jews and the Orthodox Jewish community, I sometimes avoid being explicit about my personal life (this probably says more about my own prejudices against Orthodoxy than about any possible barriers that being open would cause).

So now, for the first time, I am actively mixing my general Jewish Social Justice work with trying to be that positive role model I have not quite been in the past. Together with friends involved with establishing Keshet UK, I am offering to speak to young people about the experiences of growing up young, Jewish and queer. We have our first sessions booked in January and are offering others less familiar with group work with young people training, so they too can participate in increasing the visibility of young gay Jews. We hope to offer a safe and supportive space for young people to ask questions, so they can be more inclusive and sensitive in how they interact with one another and so that young people who may themselves be questioning their sexuality have people they can relate to.

Obama, Idit, Joseph and the Torah teach us that language is important and in that spirit I have a mini-campaign of my own.

Instead of asking teenage girls if they have a boyfriend or teenage boys if they have a girlfriend, try asking both the more open question ‘Are you seeing anyone ?’. Maybe we can remove a little of our hetro-centric assumptions from how we speak with each other and particularly young people. Instead of asking who they are, let them answer ‘Here I am’. We might just create a culture where it’s a little easier to say, to ourselves first, and then to the world, Hineini!