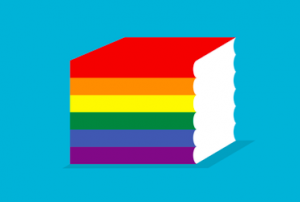 When my Jewish- and gay-themed novel Sweet Like Sugar came out in 2011, I wrote a blog post for the Jewish Book Council listing other LGBT books I thought might be of particular interest to Jewish readers. I named about two dozen titles, ranging from novels to memoirs to nonfiction.

But that was just my opinion.

In honor of Pride month, I asked several other people who know Jewish LGBT literature (including some who wrote books I’d included in my blog post) to name three essential books that Tablet readers should know about. They could define “essential” however they wanted: most accessible, most overlooked, most influential, best written, etc. The only thing they couldn’t do was choose their own books.

Narrowing down the choices to just three titles is difficult. (My own, after much deliberation: Lev Raphael’s groundbreaking short story collection Dancing on Tisha B’Av; Gad Beck’s remarkable Holocaust memoir An Underground Life: Memoirs of a Gay Jew in Nazi Berlin; and David Feinberg’s searingly comic AIDS novel Eighty-Sixed.) Here’s what the other participants chose. If you have your own favorites, let us know in the comments.

Angels in America by Tony Kushner. Kushner’s two-part epic play is the greatest work of American religious art to emerge from the second half of the 20th century.

Balancing on the Mechitza: Transgender in Jewish Community, by Noach Dzmura. The essential, historic first anthology of essays by transgender Jewish voices.

Joy Ladin is a poet and professor of English at Yeshiva University’s Stern College for Women, as well as author of Through the Door of Life: A Jewish Journey Between Genders, a memoir.

Let the Words: Selected Poems of Yona Wallach, by Yona Wallach (translated by Linda Stern Zisquit). During the 1960s and ’70s, when Israeli society was focused on conformity, Yona Wallach—often called Israel’s Rimbaud—wrote ecstatic, violent, sometimes hallucinatory poems that play with, intertwine, and overturn norms of gender and sexuality in order to expand the meaning of being human.

Adrienne Rich’s Poetry and Prose, by Adrienne Rich—in particular: “Split at the Root: An Essay on Jewish Identity,” “Yom Kippur 1984” (poem), and “The Genesis of ‘Yom Kippur 1984’”. A pioneering lesbian feminist poet and thinker, Rich also wrote probing, moving examinations of her complex relationship to Jewish identity. As the feminist movement came to reckon with the ethnic and historic identifications of women, Rich spoke openly of being “split at the root” between her Jewish and non-Jewish identifications.

A Few Words in the Mother Tongue: Poems Selected and New (1971-1990), by Irena Klepfisz (translated by Adrienne Rich). Born in a DP camp at the end of WWII, Klepfisz came to the U.S. with her mother as a young child, and grew up in a socialist, secular, Yiddishist community in New York. Her groundbreaking lesbian feminist poetry and essays, many written when the U.S. feminist movement was openly hostile to Jews and the American Jewish establishment was openly hostile to Yiddish culture, interrogate and embrace all her conflicting identifications.

Jay Michaelson is the author of five books, including the bestselling God vs. Gay? The Religious Case for Equality, and a weekly columnist for The Forward and the Daily Beast.

Queer and Loathing: Rants and Raves of a Raging AIDS Clone, by David Feinberg. Searing, angry rants from the depths of the AIDS crisis—and really good writing.

Queering the Text: Biblical, Medieval, and Modern Jewish Stories, by Andrew Ramer. Inclusion is boring. Transformation is sexy. This is what LGBT Jewish writing should be: daring, creative, and provocative.

A Queer and Pleasant Danger, by Kate Bornstein. Three or four amazing memoirs in one, tracking our trans Jewish heroine’s lives in Scientology, transition, and radical sexuality.

Lillian Faderman is the author of the award-winning memoir Naked in the Promised Land and, most recently, My Mother’s Wars, in addition to several classics of lesbian history including Surpassing the Love of Men and Odd Girls and Twilight Lovers.

Nice Jewish Girls, edited by Evelyn Torton Beck. This anthology, first published in 1982, was the first book I’d ever read that discussed being Jewish and being lesbian in the same breath. Groundbreaking.

Writing a Jewish Life, by Lev Raphael. This memoir traces the moving struggle of a gay man learning how to practice Judaism after growing up in the shadow of the Holocaust.

Beyond the Pale, by Elana Dykewomon (nee Nachman). This wonderfully-researched novel is about what it might have been like to be a lesbian living on the Lower East Side in the early 20th century, during the time of the Triangle Shirtwaist Factory fire and the Henry Street Settlement House, when “lesbian” was barely a concept.

David Levithan is the author of more than a dozen young-adult books, including Boy MeetsBoy,Two Boys Kissing, and (with Rachel Cohn) Nick & Norah’s Infinite Playlist.

Never Mind the Goldbergs, by Matthue Roth. Roth single-handedly brings a queer Jewish vibe to YA [young-adult literature] in this book (and in his other book, Losers) about a whole bunch of kids— queer and nonqueer—trying to figure out not just who they want to be with, but who they want to be.

I Am J, by Cris Beam. At the heart of Beam’s powerful novel is J, a Puerto-Rican/Jewish boy who feels he was wrongly born in a girl’s body.

Openly Straight, by Bill Konigsberg. Rafe Goldberg is tired of being seen as “the gay kid”—so when he goes off to boarding school, he decides to pass as straight…in much the same way an earlier generation might have tried to pass as non-Jewish. The laughs here are plentiful, but have a bigger point tothem.

Rabbi Debra Kolodny is the executive director of Nehirim, spiritual leader of P’nai Orin Portland, Oregon, and editor of Blessed Bi Spirit: Bisexual People of Faith, and has been a queer activist for over 30years.

God vs. Gay? by Jay Michaelson. Jay does a wonderful job unpacking the clobber texts in both the Hebrew and Christian scriptures via improved translation as well as cultural/historical/theological contextualization, helping the reader embrace a religious view of love, welcome, and respect for LGBT people.

Balancing on the Mechitza: Transgender in Jewish Community, by Noach Dzmura. Notable for its wonderful reflections on life as a transgender Jew from multiple voices.

Marjorie Ingall is a Life & Religion columnist for Tablet, where she writes about the best Jewish children’s books every year. She is also the author of The Field Guide to North American Males and the co-author of Hungry.

The Purim Superhero, by Elisabeth Kushner, illustrated by Mike Byrne. A picture book with a non-didactic story about a boy who wants to be an alien for Purim even though all his friends are dressing up as superheroes. One of his two dads draws gentle parallels with Esther’s choices about hiding and coming out as a Jew in the Purim story.

Wide Awake, by David Levithan. A gay young-adult love story set against the election of the first gay Jewish president, pitting the Decents (with their policies of Denial Education) against the Jesus Revolutionaries (a new movement that actually follows Jesus’ teachings). It’s funny, fierce, wishful, and sweet.

Gravity, by Leanne Lieberman. A thoughtful, quirky, and moving young-adult novel about Ellie Gold, an Orthodox Jewish girl in Toronto in the ’80s who’s beginning to realize she’s gay. Just ignore the baffling, god-awful cover. (This author’s Lauren Yanofsky Hates the Holocaust was on my best books of 2013 list, and it too was nuanced and singular and had a terrible cover. Come on, Orca; there must be good book designers in Canada.)

Daniel M. Jaffe is author of the new Torah-themed novel The Genealogy of Understanding, and of Jewish Gentle and Other Stories of Gay-Jewish Living. Twice Blessed: On Being Lesbian or Gay and Jewish, edited by Christie Balka and Andy Rose. This was a ground-breaking anthology of autobiographical essays covering a broad range of LGB Jewish experience, and it inspired several other such anthologies afterward.

Adrienne Rich’s Poetry and Prose, by Adrienne Rich, edited by Barbara Charlesworth Gelpi and Albert Gelpi. This Norton Critical Edition, which includes many of Rich’s writings on her lesbianism and Jewishness, captures the beauty, wisdom, and lyricism of one of the most insightful LGBT Jewish minds ever.

Sacred Lips of the Bronx, by Douglas Sadownick. This is one of the few novels that boldly renders a man’s struggle to integrate his gayness and Jewishness in a multi-ethnic, highly sexualized milieu.