A Different Kind Of Wedding

When Mindy Dickler’s son, Elie, revealed to her two-and-a-half years ago that he was gay, she felt totally alone.

Today, Dickler and others in the Baltimore community are working to make sure that parents and families of LGBT Jews never feel alone again.

“In some ways, it’s very individual,” Dickler said of the process of accepting and embracing the new information she learned after her son went to college. But “certainly in my experience I felt it was important to connect.”

Last year, Dickler and about a dozen other gays, lesbians and their family members started JQ Baltimore, a support network for those transitioning out of the closet and their friends and family. On March 2, the organization teamed up with the Keshet Parent & Family Connection to host a panel discussion at Beth El Congregation on same-sex marriage. 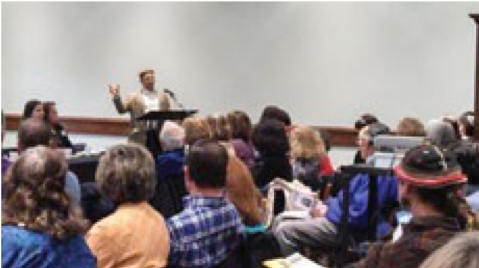 Panelists included Rona and Alan Zuckerberg, parents of a gay son; Jessica Leshnoff and Holly Beatty, a married couple; Ron Kaplan and Yoni Bock, another married couple; Dr. Bruce Hornstein, who married his husband in Vermont in 2002; and Rabbis Geoff Basik, Laurie Green and Gila Ruskin. From techniques for discussing same-sex relationships with family to the details involved in planning a traditional Jewish wedding for a non-traditional couple, discussion topics covered a broad expanse of life out of the closet for both LGBT individuals and their families.

Ruskin started the panel discussion by telling the story of the first same-sex couple she married, in 2013.

“I had been ready for years,” Ruskin said of the decision to officiate over a same-sex wedding, “but they were the first ones to ask.”

Within a few months of being married, one of the women became very ill. Because of laws that went into effect in 2013 allowing same-sex marriage in the state of Maryland, the woman’s spouse was able to make the health-care decisions in her final months of life, noted Ruskin, choking up.

“I will treasure [that wedding day] as long as I live,” said Ruskin. For Basik, the decision to wed gay couples was equally easy.

“An intimate, loving relationship, what could be more holy than that?” he asked. “I trust myself to know what holiness feels like.”

Leshnoff and Beatty’s wedding, they said, transformed the way their families viewed their relationship.

Despite having been together for seven years, they were careful to act more like friends than a couple in front of their family members.

“We sheltered our parents and our families for so long,” said Beatty. “It was the first time our parents actually saw us as a couple.”

“I think for seven years they were still waiting for us to be done,” added Leshnoff. “Now they see it’s forever.”

Kaplan and Bock discussed the more intricate details involved in planning their wedding.

“We really wanted something that was traditional,” said Bock. But the couple quickly realized this was no easy task, as halachic traditions are based on heterosexual couples.

Take for example, they said, the notion of acquisition. In traditional ceremonies, the man acquires the woman. For Kaplan and Bock though, the acquisition was mutual. Instead of dropping the

kinyan altogether, they chose to make it their own, each bringing something of value — in their case, a mezuzah and a klaf — and placing it in a container.

For other panelists, the struggle continued past the ceremony.

Hornstein had adult children when he married his husband. He has a good relationship with two of his three children but is estranged from the third.

Rabbi Tova Dodi, a mother and a same-sex marriage advocate, attended the discussion and sat in the audience. The fact that talks like this are taking place is encouraging, she said.

When one audience member voiced concern over boys being raised by same-sex couples, Dodi replied that she and her partner had raised sons.

“The hardest thing that we had to teach them was how to pee in the toilet standing up,” she told the man. “A family is the same whether it’s straight or gay,” she added later.

For Dickler, the road to accepting that her son would not grow up to meet a nice Jewish girl to marry had its bumps, but the tough part is over. Now, she says, she looks forward to her two daughters and Elie finding nice Jewish husbands.

Said Dickler to the crowd as the discussion concluded: “It’s not a shanda, it’s something to be proud of.”