‘We stand in solidarity’: Jewish organizations respond to the protests over George Floyd’s death

(JTA) — Jewish groups are expressing outrage over the death of George Floyd, a black man killed last week by a Minneapolis police officer who has subsequently been charged with second-degree murder, and solidarity with the sweeping national protests that have followed.

Here are excerpts from the statements we’ve seen so far. Know of something we’ve missed? Please send it our way.

Truah, a social justice organization of rabbis, issued a statement May 27, after the first night of protests in Minneapolis:

This week, the divine image is diminished as we mourn the murder of George Floyd at the hands of the Minneapolis police. This is yet one more tragic example of the racist violence too often perpetuated by police officers, who are charged with protecting all of us–not only some of us. We again face the reality that people of color in our country live in fear that encounters with law enforcement will result in serious injury or death.

We say once again: Black Lives Matter. And we commit to creating a country that lives by this statement.

The Jewish Council for Public Affairs, an organization working with 130 local groups across the United States, tweeted an image of two dozen black men, women and, in one case, a child who have been killed by police officers:

The CEO of the Anti-Defamation League, Jonathan Greenblatt, connected George Floyd’s death to “an explosion of racist murders and hate crimes” across the United States:

We stand in solidarity with the Black community as they yet again are subject to pain and suffering at the hands of a racist and unjust system. While it is a necessary first step in the pathway towards justice that former Officer Derek Chauvin was taken into custody yesterday, it is simply not enough. Based on the horrifying cell phone footage that has rightfully outraged Americans across the country, it is clear that the three other former officers who participated in Mr. Floyd’s death need to be held responsible for their actions to the fullest extent of our legal system. The Hennepin County District Attorney and local investigators must do everything in their power to ensure the wheels of justice turn swiftly. As an organization committed to fighting all forms of hate, we know that this brutal death follows an explosion of racist murders and hate crimes across the U.S. As an agency that has stood for justice and fair treatment to all since our founding in 1913, we know that this has occurred at a time when communities of color have been reeling from the disproportionate health impacts and economic consequences of the coronavirus pandemic.

The national rage expressed about the murder of Mr. Floyd reflects the depth of pain over the injustice that People of Color – and particularly Black men – have been subjected to throughout the generations. In recent months we have seen, yet again, too many devastating examples of persistent systemic racism, leading to the deaths not only of Mr. Floyd but of other precious souls, including Breonna Taylor and Ahmaud Arbery.

We remember others before them: Eric Garner. Tamir Rice. Trayvon Martin. Sandra Bland. Oscar Grant. Philando Castile. Walter Scott. Terrence Crutcher. Samuel Dubose. Michael Brown. The list feels endless, and so too is our despair. But as we recite the Mourner’s Kaddish for them all, we say now, again: We will not sit idly by.

Our country simply cannot achieve the values of “justice for all” to which it aspires until we address ongoing racism in all sectors and at all levels of society. We remain in solidarity and action with the NAACP’s urgent #WeAreDoneDying campaign, whose policy demands cover areas of criminal justice, economic justice, health care, and voting, especially as the COVID-19 pandemic continues to disproportionately impact Black Americans.

Keshet, a group that advocates for LGBTQ Jews, expressed solidarity with black leaders:

For the past two days, the Jewish community observed Shavuot, a holiday rooted in learning and action that commemorates when the Jewish people were given the Torah. The Talmud teaches that anyone who destroys one life has destroyed an entire universe. The systemic racism that allows Black people to be murdered with impunity is destroying our world.

As we work to advance equality and justice for LGBTQ Jews, we take seriously the need to build a world in which people of all races and ethnicities can live in safety; a world in which the bodies of Black, Brown, Trans, and Queer people are treated with dignity and respect. Keshet stands in solidarity with Black leaders – in the Keshet community and beyond – whose wisdom and insights are instrumental to building a just and equitable future. We vow to voice our outrage and demand justice. #BlackLivesMatter

Sheila Katz, CEO of the National Council of Jewish Women, said this:

We will not remain silent. As a national organization made up of over 100,000 advocates in communities around the country — including Minnesota — we are outraged and devastated by the murder of George Floyd. Mr. Floyd was murdered by multiple police officers who held him down with their knees, however, the underlying cause of his death is systemic racism. It is both unacceptable and exhausting that in 2020, we still need to insist over and over again: Black Lives Matter. …

Through legislative reform, local activism, and by educating NCJW advocates, we will make sure each individual we engage helps end the toxic culture of racism that permeates our country. For now, it is important to support Black and Brown communities and the leaders spearheading the peaceful, anti-racist responses unfolding. Together, we will make sure the memory of George Floyd will be for a blessing. 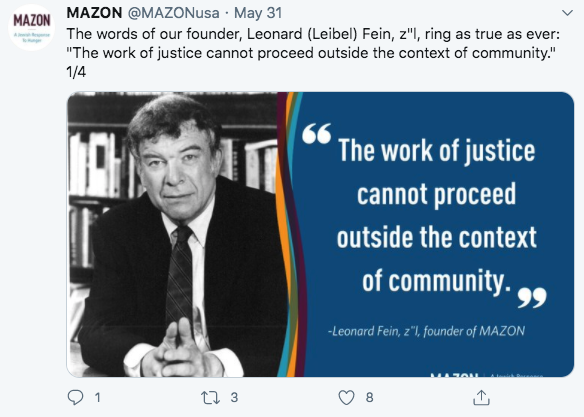 The Rabbinical Assembly, the international association of Conservative and Masorti rabbis, called for sweeping changes to policing in America:

We join in the collective call for peace and reflection during civil unrest, but understand that to achieve this end we must act. For these reasons, the Rabbinical Assembly calls on legislators at the national, state, and local levels to fundamentally change their approach to law enforcement and the justice system so that they serve and protect all Americans, regardless of race nor ethnicity. We encourage our own members to reach out to other communities, to Jews of Color, as well as to local law enforcement to help lead and shape these endeavors within the community.

United in purpose, we will dismantle the systemic racism all too embedded still within American law enforcement and its justice system. The firing and we hope prosecution of the four Minneapolis police officers involved in this one egregious murder is a necessary step, but it cannot be the only action against structural injustices that have plagued generations and continue to this day. We must forever strive for a free and just society for all people.

Here’s what the Jewish Federations of North America said:

Some local federations went further in spelling out how to do that. The Jewish Federation of Greater Cleveland, for examples, asked its constituents to take specific actions:

The Jewish Federation of Cleveland has been in regular contact with leaders of Cleveland’s black community and will work in concert with them to help bring about a change that is long overdue. It won’t be easy, but we must take action towards dismantling the systems of oppression that threaten the lives of all people of color every day in our country. We need your help:

Put pressure on [Minneapolis] District Attorney Mike Freeman to charge and arrest the officers responsible by calling 612-348-5550
Protest peacefully – violence and vandalism cannot be allowed to distract from the important message that must be sent
Challenge your own conscious and unconscious biases on racial equity and inclusion by reading more, asking more questions, and listening more closely to ensure you’re being the best ally you can as part of the collective journey our society must take
Our Jewish traditions and values compel us to stand up for the rights of all people without prejudice or bias. If we do not speak out, if we do not take action, we are part of the problem.

Other local Jewish organizations have also weighed in. From Baltimore, which experienced its own recent protests after a man died in police custody there, the Baltimore Jewish Council said:

The Baltimore Jewish Council joins Jewish communities across the nation in expressing our grief over the death of George Floyd. Our country has experienced too many incidents of police brutality, including the detention and death of Freddie Gray in Baltimore. We stand in solidarity with our friends in the Black community, united as an ally in the fight for equality and the right of all people, regardless of the color of their skin, to live without fear of our government.

We must stand together against hatred and bigotry in any form and uphold the core American values of justice and equality. We commit to taking concrete action to improve relations and enhance understanding between communities here in Baltimore, and between minority groups and law enforcement officials. Because the function of law enforcement is so vital to society, and the because the majority of law enforcement officials are dedicated public servants, it is incumbent upon us to quickly and effectively address violations and violators in a manner that preserves public trust and achieves justice and equality for all.