I thought for one foolish moment that 5774 offered a shallow harvest for Pesach supplements. But I was totally wrong and many thought-provoking, educational, and even downright moving contributions to Passover religious life. Here Jewschool collected this year’s notables and even further below are more fascinating options from previous years. [Updated: Avodah: The Jewish Service Corps released theirs today. Make that the top 8.] 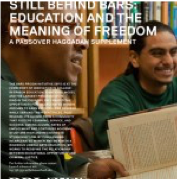 The Bard Prison Initiative at Bard College has produced a beautiful and moving supplement on an important American issue on mass incarceration and education. Highlight: “Our fellow citizens who are prisoners are incarcerated because of crimes they committed mostly as young men and women. They are individuals who did not have the privilege to learn and study. We Jews believe that learning is a form of prayer and that learning and studying are the foundation of judgment.” 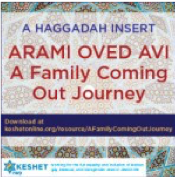 Keshet’s truly inspiring seder supplement should receive a special award in my eyes. This short but deeply touching piece is based on a true coming out story and reworked to be read by anyone: “Several years ago, Keshet member Adina Koch came out at her family’s Passover Seder. In true Koch family fashion, she did so by offering words of Torah. […] This Pesach, we offer Adina’s words of Torah as a teaching for all of our Seder tables.” 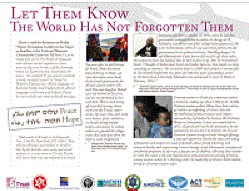 Nearly every lefty Israel org collaborated on this seder supplement on African asylum seekers in Israel, including Truah, New Israel Fund, Right Now, Ameinu, plus the RRC and RRA, three save Darfur groups, and more. This one weaves first-hand testimonials symbolically tied to the Pesach foods. Highlight: “In reality, no one [verse of Dayeinue] alone would indeed have been enough. But we celebrate each step toward freedom before moving to the next step. If we dismiss small victories, we will never achieve the whole liberation.” 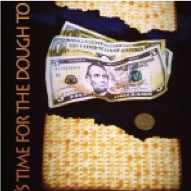 Jews United for Justice gets an award for the cheeky title and totally fun content of their full-length haggadah “It’s Time for the Dough to Rise.” Part of their campaign to raise the minimum wage in Washington, DC, this richly educational guide includes helpful visuals on wage disparities (for the wonks among you) and snarky new lyrics to classic Passover songs. Highlight: The a vew Dayeinu (for everyone else). Highlight: “If Mongtomery and PG / Along with Washington DC / Raised the wage to $11.50—Dayeinu!” 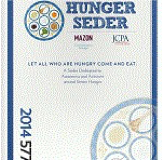 Mazon and the Jewish Council for Public Affairs released the glossy full- length Let All Who Are Hungry Come and Eat, about not just hunger but senior hunger. The highlight of one to me are the “Four Elders” who ask how they can help end hunger and a sobering litany of ten plagues of modern-day poverty. “The plagues we see today are not punishment from God, but ones of our own doing — the awful, untintended results of our own actions and creation.” 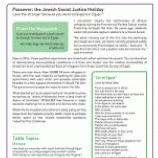 Pardes Institute of Jewish Studies produced three haggadah handouts, one for each track of their program. The Social Justice Seder provokes thoughts about the plight of African asylum seekers in Israel, the Rodef Shalom Seder asks us to put ourselves in the Egyptians’ shoes, and the Educators’ Seder invokes differences between telling and discussing. Highlight: “How might an Israelite and Egyptian spokesperson tell the story differently?”

Finally, this insert one celebrates non-Jews. The Jewish Foundation for the Righteous celebrates Raoul Wallenberg, the Swedish diplomat who saved tens of thousands of Jews in Hungary during the Holocaust. Highlight: “But we also give thanks for those in every generation who came forward to lead our people out of the darkness.[…] During this dark time, there were those who had the courage to care – non-Jews who risked their lives, and often the lives of their families, to save Jews from death.” 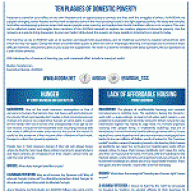 Update: As a not-too-late addition to this list, Avodah: The Jewish Service Corps just published their addition, commentaries on the ten plaques by Avodah members and alumni. The Ten Plagues of Domestic Poverty include the lack of affordable housing, debt, the threat to voting rights, and (the biggie) intersecting oppressions. Highlight: “Our ability to tap into our personal experiences with antisemitism in addition to our community’s struggle allows us to build solidarity with these communities and adds to our call for tikkun olam — to repair the world — because it is a world we share.”

If you’re still hunting for more resources, then here’s a few from previous years worth perusing:

Oh, and this one too: a Bob Marley-themed interfaith seder guide by the people over at Peace Is Sexy.