Keshet and the Jewish Multiracial Network have teamed up to create a comprehensive list of blogs, social media accounts, articles, and multimedia dedicated to sharing the ideas and experiences of QJoC. Please note that this resource is a few years old, and some of the links no longer work. We are working to update this soon. 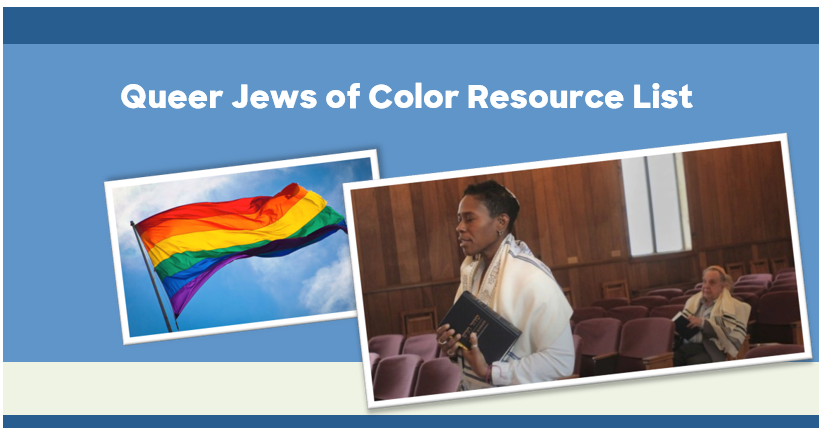 If you identify as a queer Jew of color, you may have noticed the scarcity of cultural representations of your experiences. While there are online resources for LGBTQ Jews, LGBTQ people of color and Jews of color, few are devoted to the unique experiences of LGBTQ Jews of color.

Keshet and the Jewish Multiracial Network have teamed up to create a  list of blogs, social media accounts, articles and multimedia dedicated to sharing the ideas and experiences of QJoC. Below is what we have compiled so far, and we’re counting on you to help fill in the gaps in our knowledge. If you know of any resources that are not included on this list, email us and let us know! We’d love to learn about your favorite blogs or writers, and share their ideas with the Jewish Multiracial Network and Keshet communities.

A Selection of Blogs

Black, Gay and Jewish is Erika Davis’ blog, exploring questions of identity and her personal experiences as a black, gay and Jewish woman living in the United States. The blog acts as a space for connection and sharing, as well as a platform for advocacy for women, people of color, Jews of color, Jews by Choice and the LGBTQ community, Jewish and non- Jewish.

The Rabb-IT is the personal blog of Sandra Lawson, a rabbinical student at Reconstructionist Rabbinical College, and a queer Jew of color. The blog focuses on Lawson’s multifaceted identity and wide range of interests (sociology, personal training and food activism, to name a few), as well as her desire to make the world a better place for all.

A Selection of Articles by and About QJoC

Gay, Asian, Jewish and in Charge

Robert Bernardo, president of the Gay Asian Pacific Alliance, discusses his path to Judaism. When he learned about Judaism, he said, “It just resonated with me. There was something about the religion that made perfect sense.”
Weekly, July 29, 2005.

Not just anyone can go around saying that he is a proud gay Jewish Japanese musician. But singer and songwriter Danny Katz is not just anyone. Jewish Multiracial Network, Aug. 13, 2010.

What It’s Like to Be a Gay Black Professional Jew

Ilana Kaufman wears many hats; she’s a mother, a Jewish professional, a lesbian and a black woman. Here, Kaufman, public affairs and civic engagement director at the JCRC of San Francisco Bay Area, discusses the experiences and challenges of playing so many roles. Forward, Aug. 11, 2014.

Coming Out and Inviting In

Kathryn Macías reflects on her process of coming out as a Jew by Choice. My Jewish Learning, Oct. 6, 2014.

He Is Black, Gay and Jewish — and He Sings in Yiddish

There is no one else in the entire world quite like Anthony Mordechai Tzvi Russell. Russell is black, openly gay, Jewish and a professional singer of both European opera and Yiddish music. Chestnut Hill Local, June 19, 2015.

Ashkenormativity Is Twice as Common — and Harmful — in LGBTQ Jewish Spaces

Jay M. Stanton discusses Ashkenormativity as it reinforces the idea that there is an authentic cultural and religious expression LGBTQ Jews (and all Jews) must adhere to it creates shame in those who cannot or do not fit the norm. Forward, Aug. 24, 2015.

A large online archive of material about Jewish diversity, maintained and hosted by Be’chol Lashon.

Who Counts? Race and the Jewish Future

Here, Ilana Kaufman, public affairs and civic engagement director for the Jewish Community Relations Council of San Francisco, asks “who counts?” as she issues a challenge to the Jewish community on race.

Erika Davis is interviewed on “All Things Gay,” a program on Portsmouth Community Radio.

“Off and Running” tells the story of Avery, an African-American teenage track star from Brooklyn with a bright future. The adopted child of white Jewish lesbians, Avery has two adopted brothers (one mixed-race and one Korean), and grows increasingly curious about her roots. Her choice to contact her birth mother propels Avery into a complicated exploration of race, identity and family, creating distance between her and the parents she’s always known.

LGBTQ Jews of Color to Know