Keshet is proud to honor Jacob Lemay & the Lemay family at OUTstanding! Boston 2020! 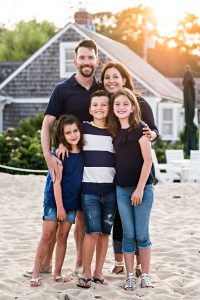 At the age of two-and-a-half, Jacob Lemay began telling his parents that they were mistaken about his assigned gender. “I am not a girl,” he said. “I am a boy.” By three, he was showing signs of a deep unhappiness and anxiety; Now 9-years-old, Jacob is a thriving, affirmed male, who, with his family, continues to advocate for inclusion, equality, and understanding as they share Jacob’s story of transformation with the world.

When Mimi Lemay published “A Letter to My Son Jacob on his 5th Birthday” in 2015 with her son’s permission, the Lemay family’s story went viral. First picked up by Boston.com, the Lemay’s story NBC Nightly News segment entitled, “Jacob’s Journey,” remains the network’s single most watched piece, reaching close to 40 million viewers. Mimi’s memoir, “What We Will Become” weaves the story of her upbringing in Ultra-Orthodox Judaism with her parenting journey with Jacob, and was released in 2019 to critical acclaim.

Today all Lemay family members are advocates for transgender and non-binary rights, having lobbied Massachusetts’ Trans Equality Public Accommodations bill campaign and the Yes on 3 campaign to ensure that protections remained in MA for trans and non-binary people. Jacob’s older sister, Ella was a vocal participant in Attorney General Healey’s 2015-2016 “Everyone Welcome” campaign and delivered an impromptu rebuke to the repeal of the Title IX protections that guaranteed transgender students protection in our nation’s schools. Joe and Mimi Lemay are members of the Human Rights Campaign’s Parents for Transgender Equality National Council, and Mimi speaks regularly at schools and businesses to promote inclusivity and genuine belonging.  Most recently, Jacob, asked US presidential candidate Elizabeth Warren “What will you do to make sure kids like me feel safe in school,” at a Presidential Town Hall proudly representing trans and non-binary kids across the country.

The Lemay family lives in Massachusetts, where Jacob is an engaged and joyful member of his public school community.